Archaeology analysts have attempted to determine the textile’s base material used in ancient Roman textiles. The four major types of fabric are wool, linen, silk, and cotton. By intimately examining the fibers, using microscopes, the archaeology investigator is able to learn much about the material.

Linen fibers have a natural tendency to twist when wet and generally have been historically spun to the left while cotton fibers are spun to the right. 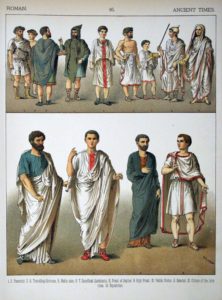 Wool, on the other hand, has no natural twisting tendency and can be found spun either clockwise or counter-clockwise although collective data seems to indicate that there is a correlation between place of origin and the direction of spin.

The clothing of the Romans was simple. They usually wore 2-3 articles of clothing not including shoes. All the garments varied in material and name from time to time. There was little change in style during the late empire and early empire.

Early contact with the Greeks on the south and with the Etruscans on the north gave the Romans a taste for beauty that was expressed in the grace of their flowing robes.

Clothing for men and women were very similar. The toga was worn often during state occasions. Consuls and senators wore a toga edged with purple. Some Roman senators wore white togas that were ten meters long. Some emperors’ togas were made entirely from either purple or black cloth. Black togas, though, were usually only worn in times of mourning. 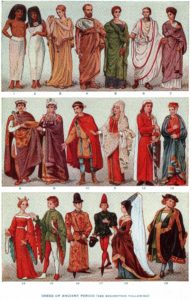 Roman writers assigned each article of clothing into two classes according to how it was worn. One was Indutus (put on), that was considered undergarments. (Underwear) The other was called amicus(wrapped around), that was outer garments.

A Roman could tell how important or wealthy a person was from their toga. Free Roman men wore the toga instead of a cloak. It was originally an Etruscan garment worn in earlier times by both men and women of all classes. The toga was made from white wool or white Egyptian linen. It was square or rectangular in shape and was worn draped around the body. 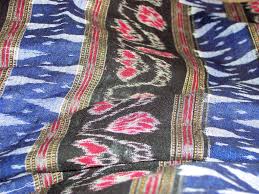 Togas looked like a white sheet 9 yards long. They were arranged very carefully, in a stylish way. Togas fell out of style rather early. (The toga was inconvenient, and people felt the cold when they wore it.) To get anyone to wear them, even very early emperors had to legislate the wearing of togas by at least senators. Eventually, the emperors gave up.

Ancient Roman Textiles, found in good condition, and other fabrics that have survived hundreds, sometimes thousands, of years, often provide the most helpful information about the ancient Roman textile industry.

When archaeology experts examine extant textile remains their findings assist in understanding the methods and materials of Roman textile dyeing and manufacture, and also provide much indirect evidence about many other aspects of ancient Roman culture.