Ancient Roman Soldier Clothing: A Roman soldier was usually part of a Roman Century which was a team of 100 men often formed from one locality. Centuries could be put together quickly and were often used for short periods of time and called on the services of fit farmers who would leave their farm in the care of family and older workers. 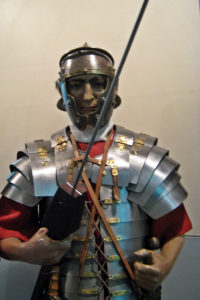 All Roman Soldier Clothing was military standard, so everyone would look uniform. There were three basic defensive tools used to prevent the attack. The Lorica, also known as the breastplate, was built to withstand frontal attack. The Galea, Latin for a helmet, was made to prevent crushing blows to the head and face. 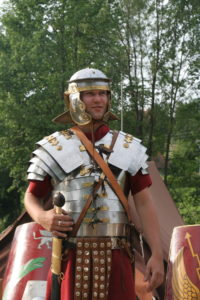 The basic clothing including the tunic or cloaks of the Roman soldier was either red (dyed with madder) or undyed material giving an off-white color. The Tunica was like undergarments we have today.

The next layer of clothing was much like a jacket, a cloak of sorts that was worn over the tunica. And to top off the look, every soldier wore a pair of Caligae, extremely heavy boots made for marching. In addition, all the equipment was carried over the soldier’s shoulder in a Sarcina. The Sarcina would weigh about 50 pounds when completely full. 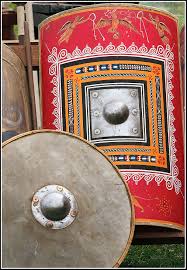 The heavy cavalryman wore a mail shirt reaching from the neck to the waist or thighs. A small steel helmet protected his head whilst gauntlets and steel shoes protected his hands and feet.

The horses of the officers and of the men in the front rank also were armored with protection to their heads and chest. Over their Armour, the riders would wear a linen cape or tunic to protect themselves against the sun or a heavy woolen cloak to protect against cold weather.

The Military Tunic (Tunica) was a wide, shirt-like, undergarment made of a long piece of rectangular cloth, made of wool, cotton or linen depending on the climate. It was originally sleeveless and usually white. The tunic later acquired sleeves. The tunic was girded with great care to the exact length considered correct for the rank of the wearer.

The more heavily armed footsoldier, the so-called Scutatus wore a pointed steel helmet and a mail shirt. Some of them may have also worn gauntlets and greaves to protect the hands and shins.

The Scutatus carried with him a large round shield, a lance, a sword and an Axe with a blade at one side and a spike at the other. The shield and the color of the tuft on the helmet were of all the same color for each war band.