The ancient Roman toys were very popular among the children of ancient Rome. The toys of ancient Rome varied according to the imagination of the child as well as his interest. Interestingly, a great proportion of the Toys played in ancient Rome were real life imitations of situations. For example, dolls for girls and wooden swords or horses for boys.

The toys available to a child also depended upon the social rank to which a child belonged. Children born as slaves did not enjoy their childhood in the vicinity of toys. Rather, they were found mainly working for long hours in the fields or performing the household chores.

The commonly used toys, games and other pass times by both boys and girls were the following. There were ball games called Pilae, hoop and stick called trochus, wooden, wax or terracotta dolls played by young girls, wooden military equipment for boys such as swords, shields, and horses. 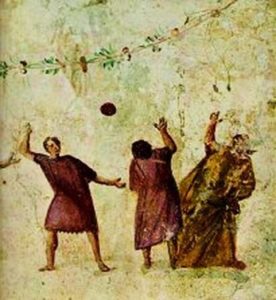 Marbles were played in the ancient Roman period with nuts and hazels. The children also played board games such as Latrunculi or Reges, as well as the famous game of noughts-and-crosses. The ancient Roman kids also loved keeping and playing with pets. Dogs were the favorite pets. Sometimes birds or farm animals such as ducks and hen were kept as pets.

The ancient Roman boys loved to play team games, involving mock battles and war-type games. A popular game among the boys of ancient Rome was the game of Troy, in which they fought wars with wooden swords, shields, etc.

The ancient Roman girls played with rags dolls and dolls of wax, terracotta or clay. Some dolls even had jointed legs and arms. The girls also played board and ball games.