Ancient Roman Letters: The ancient Romans were very proactive in matters of trade and commerce. The system of numbers developed gradually and is used even today. 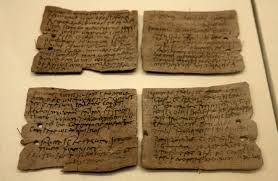 An important fact about the ancient Roman letters and numerals is that they are used to indicate and highlight the order of rulers or even ships who share the same name, for example, Queen Elizabeth II.

They are also used in the publishing houses for copyright dates, index numbers, etc. The ancient Roman letters and numerals are even used on gravestones when the family of the deceased wishes to create an impression of dignity in the eyes of the people. The Roman numbering system finds use even today, in the modern world.

Another consequential fact about the ancient Roman numerals, particularly the ones which we use today is that the Roman numerals did not have a symbol (Symbolism) for representing zero.

The basics behind the ancient Roman numerals along with their meaning are given below.

Firstly, there was the ancient Roman letter ‘I’ which meant 1; double mark, that is, II meant 2; three I, that is, III, meant 3.

Then the Romans moved to another letter ‘V’ to denote 5. Placing I in front of the V or placing any smaller number in front of any larger number indicated subtraction. So IV meant 4. After V came a series of additions like VI meant 6, VII meant 7, VIII meant 8.