The ancient Romans were sophisticated in the packaging of goods, especially in the use of trademarks. One was the logo used by the wine merchant Marcus Sestius, whose wine ship was excavated off the coast of Marseilles, France in the 1950s. 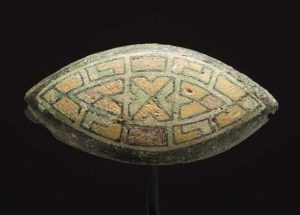 A good trademark was expected to connect the symbol with the business at a glance and communicate some fundamental information about the business. In Marcus Sestius’ case, it was clear his business was the sea. His mark was also found on land in similar form. On the Aegean island of Delos, thought to be his home port, was found a mosaic on a house floor with the SES pattern, this time with the trident forming the E.

A wine jug found in Pompeii carries the trademark Vr in uses Coelia Proculae, in which Vr stands for “Vinum Rubrum.” The mark translated as “Red wine for the enjoyment of Coelia Procula.” Many trademarks did not use “proper” Latin. The use of abbreviations and the combining of letters was an accepted practice, rather than slang, much as we in English would be comfortable with such terms as “Inc.,” “OK,” or “etc.” in an ad.

The combining of letters, in this case, V and R, was an attractive design element. It had a much different look than the letters simply placed next to each other. And this practice that continues today.

Scriptores or sign painters were primarily responsible for the work like election signs, shop signs, announcements of games that have been found throughout Pompeii, Herculaneum, and Ostia. Working sometimes alone, sometimes with assistance, they created some very handsome advertising.

Scriptores, also sometimes called signatures solicited and serviced clients, created advertising arranged for its placement and carried out the production process. They usually worked at night, assisted by a debtor, or white-washer, and a Lanternarius, or lantern-holder. Their primary medium was the wall, which by whitewashing could be used over and over again.

Orators were people who spoke for a living, usually on the behalf of others, like public relations people today. Like orators, many ancient Roman writers occasionally mixed advertising with their philosophy. The poets Martial and Horace mention specific brands of wine in their work, and even Virgil is accused of this act.

While there were other civilizations that existed before the Roman era, none had the marketing climate equal to this empire. Others had coined money, developed language, technical skills, government; but nowhere else do we find the abundance and acceptance of advertising and related businesses.

This was probably due to the Romans themselves as with the social or political or commercial environment in which they lived. They were, by and large, a highly literate people. They were artistic. They enjoyed living the good life.

In a way that was perhaps not possible in other old cultures, people could achieve some measure of respect, relative wealth, and improvement of their status through commerce. By capitalizing on new trends and out-thinking competitors, by building better mousetraps and using a new communications phenomenon we now call advertising, the Romans achieved all of these, and greatness too.

Interestingly, if an ancient Roman merchant or scripture walked into a modern advertising agency, their portfolio of work would look dated only in terms of radiocarbon dating. Their style, freshness, persuasion, and originality would win a few awards.