Roman civilization with its developed lifestyle and general social structure also gives us hints about the various eatables and beverages that existed during those times. Particular evidence proves that ancient Rome had the concept of the winery. People had the know-how of making wine during those times.

We can depict this, from a mosaic found at Pompeii, in which a skeleton holds wine vessels. A similar find was discovered from the “Boscoreale skeleton cup”, which described mating dogs as a testimony that life goes on in spite of age-old philosophical question of life and death which is denoted by the skeletons around the cup.

By the time these artifacts were created, the wine was embedded deeply into all aspects of Roman civilization, which includes not only Rome or other urban centers but also of the many provincial towns and villages which slowly developed with its production and trade. Pompeii is mainly, a significant example of that. 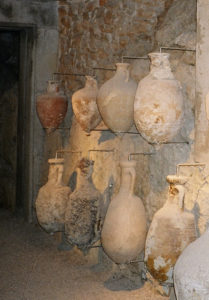 To understand how all this actually evolved, will point to a long step back into the history of ancient Roman civilizations key beverage; the Roman wine, its production, and the succeeding trade, supply chain management that developed from it.

It is said that wine had to be brought into Italy from nearby places. Greek people used to supposedly bring this wine from the native Greek colonies in southern Italy. It is also said that trade between Greece and Etruscans was carried out, sometime during the 8th century BC. 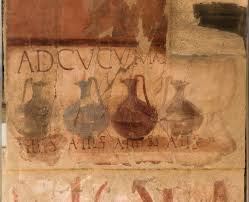 Recent scientific research studies under the project known as “VINUM” was done and it was found out that the genetic print of wild wines growing around Etruscan sites in central Italy (southern Tuscany and northern Latium). 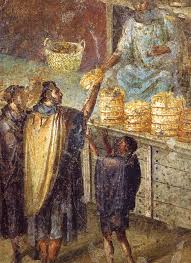 So the likely reality is that whilst the resident Etruscans tamed existing local vines in central Italy, the Greeks were bringing their own varieties into southern Italy around the eighth century BC. The Etruscans, like the Greeks, traded their own produce far and wide across the Mediterranean. The Greeks themselves are likely to have received wine from areas such as Persia or North Africa/Libya.

It is likely that with the wine they also acquired the cult of the deity Dionysus which they then disseminated in parallel with the wine trade. The same deity was known to the Romans as Liber or Bacchus and to the Etruscans as Fufluns.

Last but not least, understanding of ancient Roman wines requires us to distinguish between various classes of the wine: