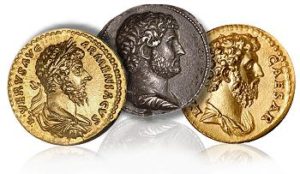 Unlike most modern coins, Roman coins had intrinsic value. While they contained precious metals, the value of a coin was higher than its precious metal content, hence they were not bullion.

Estimates of the value of the denarius range from 1.6 to 2.85 times its metal content, was thought to equal the purchasing power of 10 modern British Pound Sterling at the beginning of the Roman Empire to around 18 Pound Sterling by its end (comparing bread, wine and meat prices) and, over the same period, around one to three days’ pay for a Legionnaire.

The majority of the written information about coins value which survives till today is in the form of papyri preserved in Egypt’s dry climate. The coinage system that existed in Egypt until the time of Diocletian’s monetary reform was a closed system based upon the heavily debased tetradrachm. Although the value of these tetradrachmas can be reckoned as being equivalent in value to the denarius, their precious metal content was always much lower. 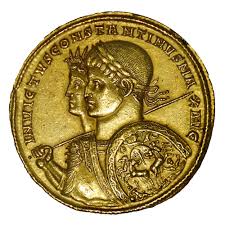 Clearly, not all coins that circulated contained precious metals, as the value of these coins were too great to be convenient for everyday purchases. A dichotomy existed between the coins with an intrinsic value and those with only a token value.

The imagery on Roman Gold Coins took an important step when Julius Caesar issued coins bearing his own portrait. While coins which were issued earlier contained portraits of ancestors, Caesar’s was the first Roman coinage to feature the portrait of a living individual. 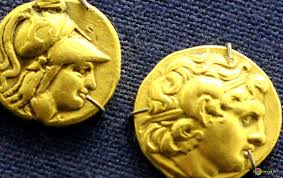 The tradition of putting one’s own portrait on coinage was not abandoned following the assassination of Caesar, although the imperators from time to time also produced coins featuring the traditional deities and personifications found on earlier coins.

The image of the Roman emperor took on a special importance in the centuries that followed because, during the empire, the emperor embodied the state and its policies.

The type of coins issued changed under the coinage reform of Diocletian, the heavily debased double denarius was replaced with a variety of new denominations, and a new range of imagery was introduced that attempted to convey different ideas. The new government set up by Diocletian was a tetrarchy, or rule by four, with each emperor receiving a separate territory to rule.

The new imagery included a large, stern portrait that is representative of the emperor. This image was not meant to show the actual portrait of a particular emperor but was instead a caricature that embodied the power that the emperor possessed. 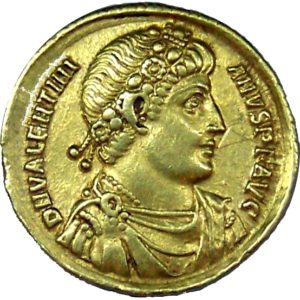 The reverse type was equally universal, featuring the spirit (or genius) of the Romans. The introduction of a new type of government and a new system of coinage represents an attempt by Diocletian to return peace and security to Rome, after the previous century of constant warfare and uncertainty.

The denarius continued to decline slowly in purity, with a notable reduction instituted by Septimius Severus. This was followed by the introduction of a double denarius piece, differentiated from the denarius by the radiate crown worn by the emperor. The coin is commonly called the antoninianus numismatists after emperor Caracalla, who introduced the coin in early in 215.

As the number of antoniniani minted increased, the number of denarii minted decreased, until the denarius ceased to be minted in significant quantities by the middle of the third century. 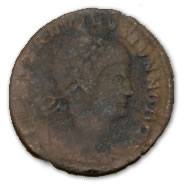 Again, coinage saw its greatest debasement during times of war and uncertainty. The second half of the third century was rife with this war and uncertainty, and the silver content of the antoninianus fell to only 2%, losing almost an appearance of being silver. During this time the aureus remained slightly more stable before it too became smaller and bigger base before Diocletian’s reform.

The decline in the silver content to the point where coins contained virtually no silver at all was countered by the monetary reform of Aurelian in 274. The standard for silver in the antoninianus was set at twenty parts copper to one part silver, and the coins were noticeably marked as containing that amount (XXI in Latin or KA in Greek).

Despite the reform of Aurelian, silver content continued to decline, until the monetary reform of Diocletian. In addition to establishing the tetrarchy, Diocletian devised the following system of denominations: an aureus(gold) struck at the standard of 60 to the pound, a new silver coin struck at the old Neronian standard known as the argenteus, and a new large bronze coin that contained two percent silver.

The starting point of Imperial age rise under Augustus was marked by new Roman currency. The new coins were minted with four metals: gold, silver, brass, and bronze or copper. The most widely used Roman currency of that time was aureus. It was launched for the first time during the Second Punic War. At this time both denarius and as we’re still in circulation. Salaries were mostly paid using gold and silver coins. The daily transactions, however, often required brass and bronze coins.

Interesting to note that Roman currency was created in the Temple of Juno Moneta, located on the Capitoline Hill. The English word “money”, by the way, comes from the Roman word “Moneta”. Trizivir Monetales were the junior magistrates that were those particularly responsible for issuing the Roman coins. The Roman Empire had different cities that minted gold and silver coins. Brass and copper Roman coins were made in mints located in several provinces.