Ancient Roman Coins Currency: The Roman Empire was the keystone of modern Western civilization. Language, religion, the arts and sciences, law and many other fields have been deeply influenced by their civilization which flourished over two thousand years ago. Money, the foundation of any modern economy, was a concept invented by the Greeks and revolutionized by the Roman people.

Modern coins the world over still incorporate design features made standard by Roman emperors. Dirty Old Coins is a leading educational company that brings this rich historical legacy to life through hands-on learning. 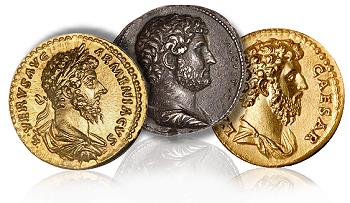 They were still accepted as payment in Greek-influenced territories, even though these regions issued their own base coinage and some silver in other denominations, either called Greek Imperial or Roman provincial coins.

During the third century, the denarius was replaced by the double denarius, now usually known as the antoninianus or radiate, which was then itself replaced during the monetary reform of Diocletian which created denominations such as the argenteus (silver) and the follis (silvered bronze). After the reforms Roman coinage consisted mainly of the gold solidus and small bronze denominations. This trend continued to the end of the Empire in the West.

With over 140,000 coins on the database, Roman coins make up the largest single artifact type recorded with the Portable Antiquities Scheme. In recent years there has been a major push to record all coins found, not just those in good condition. It is important to emphasize that each Roman coin shares equal archaeological value, irrespective of its metal or condition.

Greek and Roman citizens would bury their coins for safekeeping, much in the same way as we today place our money in the bank for safekeeping. Soldiers and citizens often buried their coins before the battle, and as people were driven from their lands or even worse, killed. The coins would remain where they lay for hundreds or even thousands of years and more.