Ancient Roman Citizenship: “Remember, Roman, to guide the nations with authority. Let these be your arts: impose the laws of peace, And spare the humbled and lay low the proud.” -Vergil
Citizenship was considered as a privileged social status which was available to certain individuals only with respect to laws, property, and governance in ancient Roman Empire.

Citizenship was one of the vital tools in the ancient Roman empire to preserve their unity. Roman citizen enjoyed all the benefits that flowed from his status. But under certain exceptional circumstances, a Roman citizen could be deprived of his citizenship. 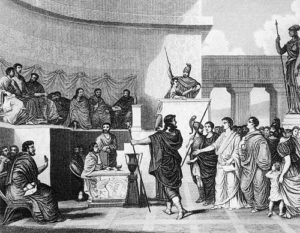 Roman citizenship was granted by birth to every male child born to Roman parents who were legally wedded. Slaves who were freed had limited form of citizenship, i.e. the still had some obligations towards their masters. 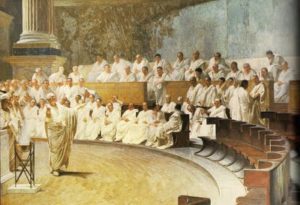 Roman citizenship was divided into different classes. They were Cives Romani, Latini, Socii, Provinciales and Peregrini.

Cives Romani was the privileged class of citizenship. It consisted of people who were full Roman citizens and enjoyed full legal protection. They were further sub-divided into two classes: The ‘Non-Optimo Jure’ who had the rights of property and marriage, and the ‘Optimo Jure’ who enjoyed the rights to vote and to hold office.

Latini class of citizens had the Latin rights. Freed slaves, convicted people of Cives Romani class were given this type of citizenship and also to those who were Latin citizens came under the control of Rome.

Socii were the citizens of those states which had entered into a treaty with Rome and therefore had treaty obligations with Rome. Increasing dissatisfaction due to the rights accorded to this class and growing manpower demands of the legions resulted in the Social War.

Provinciales was those class of citizens who lacked the rights of Social class and who had fallen under the control and influence of Rome.

Peregrini was that class which consisted of citizens who were not full Roman citizens and thus was not a member of Cives Romani class.

Citizenship was employed as an instrument of foreign policy and control. Whenever Rome used to conquer a city, it was granted a “minor” citizenship. This process of granting of citizenship to allies and the conquered states was a significant step in the process of Romanization. This was considered as the most effective political tool.