Roman generals came from the higher classes of Roman society & most were wealthy & became even richer after military campaigns. A general’s army was his bodyguard; generals always had the loyalty of their men. In the latter days of the Roman Empire, many generals were proclaimed emperor by their men. Praetorians were the elite bodyguards of “emperors” only.

How they would rise to the rank of general is a bit more complicated – all depending on the circumstances. In the early days of empire, generals came from the “Patrician” class & were appointed generals & given command of legions by the Senate when the need for it came.

At other times, an officer (tribune for example) who distinguished himself in battle would be rewarded by being made general when the next campaign rolled around. And yes, a man could become general simply because his father was one. The best example I can think of is Vespasian who came from the ranks & his son Titus.

The fact that they both became emperor eventually was not foreseen & was unexpected however a successful military leader would be able to use his own legionnaires as bodyguards; the Praetorians were specifically Imperial bodyguards (and not trusted by Emperors either) 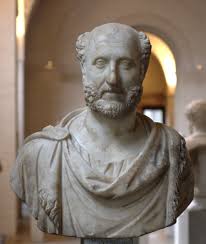 In the early days, the Roman Generals did fight with their men occasionally. Barbarian leaders always fought with their men. It showed to them that he was willing to risk his life as they were and so they could respect him. Genghis Khan did fight with his troops; he had started his own band of horsemen before the horde and everything.

Saladin also went to battle. Many Carthaginian generals fought with their men. Especially the Barcas and those that failed to ensure victory were crucified. So why not risk yourself in battle if it means you could rally your men? Tribal chiefs usually led their warriors to battle as he was either the strongest, the most respected or had to maintain respect.

Many generals fought with their men, but not all and I don’t think anyone of them could have charged into battle braved a hail of arrows charging Parsee hillmen, cut them down himself and brave the skilled Camelry of the enemy, all without retreating or even flinching.

Their skill level, like if they could win the battle without fighting, what was the point like a five-star general wouldn’t have to fight whereas any star general would fight to show his valor and courage.