Ancient Rome Pontifex Maximus: The religion of the Romans was polytheistic (with many gods, Polytheism) in nature. It encompassed the religious beliefs and cult practices regarded by the Romans as indigenous and central to their identity as a people, as well as the various and many cults imported from other peoples brought under Roman rule.

To the Romans, religion was less of a spiritual experience than a contractual relationship between mankind and the forces which were believed to control people’s existence and well-being.

Most of the Roman gods and goddesses were a blend of several religious influences. Many were introduced via the Greek colonies of southern Italy. Many also had their roots in old religions of the Etruscans or Latin tribes.

Often the old Etruscan or Latin name survived but the deity over time became to be seen as the Greek god of equivalent or similar nature. Thus, the Greek and Roman pantheons look very similar, but for different names.

The head priest of the Roman state religion was the Rome Pontifex Maximus or the greatest of the college of pontifices (people who like to believe what they say is true and don’t like any arguments). The main duty of the pontifices was to provide the pax Deorum or the ‘peace with the gods’. 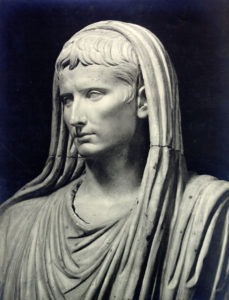 Interpreting omens, sometimes through auguries, controlling and keeping the official calendar, and the oversight of funerals all fell under the domain of the Pontifex Maximus.

By the Imperial period, there were 16 Pontifices under the high priest, 15 Flames who were special priests of the main deities, and the Rex Sacrorum (king of the sacrifices) who performed the religious acts of the king. Perhaps most importantly, he was he was also responsible for the 18 Vestal Virgins.

The priestesses of the goddess Vesta were known as the Vestal Virgins. They were the only female priests within the Roman religious system. The head of the college of Vesta was called the Virgo Vestalis Maxima, and she was under the direct authority of the Roman Pontifex Maximus. 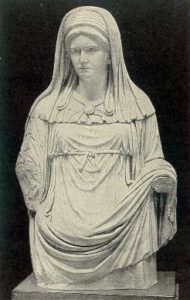 They were selected from distinguished patrician families at an age from three to ten, and such appointments were considered a top honor for any family to receive. The vestals vowed to live in chastity for the thirty years their tenure lasted. After the thirty years of duty, they were released from their duties and could then maintain a private life, including the right to marry.

They were responsible for maintaining the sacred fire within the Temple of Vesta on the Forum Romanum. Other duties included performing rituals in regards to the Goddess Vesta, and baking the sacred salt cake to be used at numerous ceremonies in the year.

Unless they were correctly addressed, the gods could not know whose favor was sought, what was being asked or who was supposed to receive the sought-after benefits. Public prayers were offered loudly and clearly by a Priest on behalf of the community. Sacrifice without prayer was “thought to be useless and not a proper consultation of the gods”.

The fundamental basis of the Ancient Roman Religion was the belief that if the Gods and Goddesses were happy then Rome and the Romans would receive good fortune. Sacrificial offerings were, therefore, made to the ancient Roman gods. The types of sacrifices were very specific and highly ritualized.

The sex of the animal had to correspond to the sex of the god or goddess to whom it was offered in sacrifice; White animals were sacrificed to the gods of the upper world whereas black animals to the underworld.