Ancient Roman Frescoes: One of the most important attributes of the Romans was the ability to assimilate ideas and customs from the cultures and societies which they encountered.

Roman Frescoes was therefore highly influenced by the art from other cultures starting with classical Greek styles, art from the Etruscans and art from all over the Roman Empire.

The content of this article provides interesting facts and information about the Roman Fresco.

Fresco, or water-color, on fresh plaster, was used for coloring walls, which were divided into compartments or panels. The composition of the stucco and the method of preparing the walls for painting is described by the ancient writers: “They first covered the walls with a layer of ordinary plaster, over which, when dry, were successively added three other layers of a finer quality, mixed with sand. 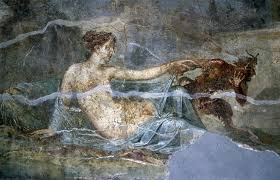 Above these were placed three layers of a composition of chalk and marble-dust, the upper one being laid on before the under one was dry; by which process the different layers were so bound together that the whole mass formed one beautiful and solid slab, resembling marble, and was capable of being detached from the wall and transported in a wooden frame to any distance. 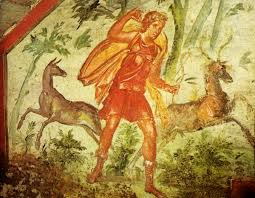 The colors were applied when the composition was still wet. The fresco wall, when painted, was covered with an encaustic varnish, both to heighten the colour and to preserve it from the effects of the sun or the weather; but this process required so much care, and was attended with so much expense, that it was used only in the better houses and palaces.”

Ancient Roman mural painting is distinguished by four periods, originally described by German archaeologist August Mau when he was excavating wall paintings at Pompeii. These four styles are used to differentiate between eras of building and decoration and shifts in Roman art.

Also called the structural, incrustation or masonry style, the first style is characterized by simulation of marble and use of vivid colors, both a sign of wealth. The style was also a replica of those found in the Ptolemaic palaces of the near east, where the walls were inset with real stones and marble.

The first style also displays the spread of Hellenistic culture at the time, a result of Romans conquering and interacting with Greek and Hellenistic states. Many were also reproductions of Greek paintings.

During the time of the second style of Roman painting, walls were decorated with architectural features and Trompe-l’Oeil technique. This technique, a French word meaning to “trick the eye,” used extremely realistic imagery to create the optical illusion that the picture itself is three-dimensional, rather than a 2-D painting.

Artists would use features such as Ionic columns and stage platforms to push the plane of the picture back farther, creating a 3-D illusion. This style counteracted the claustrophobic nature of windowless Roman houses. The predominant colors in the second style were white, red, yellow, green and magenta.

The third style was a reaction to the austerity of the period that preceded it. It was much more ornamental, figurative and colorful, and was mainly characterized by the departure from illusionistic style (though this came back into use later in the fourth style).

Strict rules of symmetry were used, however, distributing elements evenly around the central focus. Pieces would be divided into 3 horizontal and 3-5 vertical sections. The 3 horizontal sections were referred to as the socle, median area, and upper area.

The sole would be decorated with flowers and geometrical patterns, while the median area was a subdivision of large rectangular panels with simple architectural or vegetable elements. The final upper area would consist of a continuous pattern, decorated with fantastic architectures or draperies with no internal division.

The fourth style was basically a richer, more complex phase of the third style. It also used an abundance of ornament and was particularly popular after the destructive Pompeii earthquake in 63 AD, when reconstruction and retouching were necessary. 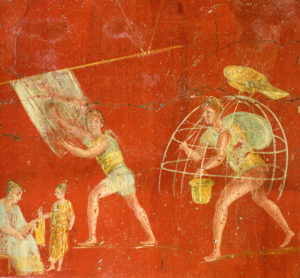 Common themes of the fourth style were representations of open doors, windows, and balconies, combined with elements of style two, such as depth and perspective. In addition, a lively emphasis on color was used.

The content of this Roman Fresco category on life in Ancient Rome provides free educational details, facts, and information for reference and research for schools, colleges, and homework.