Brick, tile and other Roman Architectural ceramics – Two manufactured materials were of great importance in Roman architecture: concrete and fired clay in the form of structural bricks and tiles, and to a lesser extent, in Roman Architectural decoration. These materials were used in buildings all over the Roman Empire, and in many areas, they fell out of use again after the Roman period, only to be rediscovered centuries later.

Like other mass-produced Roman ceramic objects, bricks and tiles were often marked with inscriptions that indicate their manufacturer, or the organization or authority, military or civilian, for which they had been made.

The Roman bricks used for building walls are often referred to as ’tiles’ because they are rather thin, flat squares, made in standard sizes, often related to the Roman foot approximately 11 inches or 27-28 cm, from around 20 cm. to about 58 cm. square, and about 5-7 cm. thick. 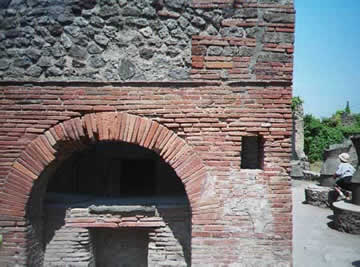 Even stone-built walls frequently incorporated horizontal tile-courses. Brick-built walls were finished with various types of facing, rendering or plastering on both exterior and interior surfaces so that the bricks themselves were not visible.

Roman hypocaust heating systems made extensive use of fired clay elements: The space beneath the floor of a room to be heated was supported on robust pillars or piles, usually made of small, square bricks mortared together, so that the heat from the adjacent furnace could circulate freely. In public and private bath-houses, the heat was also carried up through the walls in flues made of interlocking box-tiles.

Though these were covered up by wall facings both inside and out, they were sometimes manufactured with quite elaborate geometric and even figural decoration. Pipes for water and drainage were also often made of fired clay.

Ceramic tiles were not normally used for flooring in Roman buildings, though opus Signinum, a favored flooring material, was composed of concrete and crushed tile, and carefully cut small squares from tiles were often used in mosaic floors, tesserae about 2-3 cm. square being used for plain borders, and smaller squares, about 1 cm., where a red color was required in a pictorial mosaic with multi-colored geometric or figural designs. 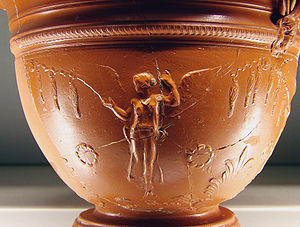 Pottery was very important during the period the Roman Empire. Most of the functional pottery created during this Empire was coarse wares. These Pots were created by the Romans from local clay that was usually red.

In order to fire these pots, the Romans used simple draft kilns that fired the pots from 900 to 1000 degrees Celsius. These simple pots were mainly left unglazed and undecorated. Occasionally the pot would be fired in smokey reduction atmospheres which would cause the pots to become black or grey.