In the ancient Roman cities, the rich and wealthy people lived in one story Roman buildings. The houses had few exterior windows for preventing noises from the streets. The wealthy and prosperous house owners sometimes rented out two front rooms of their house to merchants who were in need.

A rich ancient Roman lived in a big house separated into two parts and connected together through the tablinum or the study or by a small and narrow passageway. 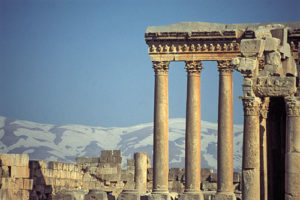 The atrium was surrounded by the master or the main rooms of the house. These rooms were the cubicula or the bedrooms, the tablinum or the study, and the triclinium or the dining-room.

The study or the tablinum was usually a passageway. The area of the study depended upon the occupation of the owner of the house. For example, if the master of the house was a banker or a merchant or a tradesman, then the tablinum was larger because of the requirement and need for a larger quantity of materials.

The backyard of the house generally and usually had a small garden, principally surrounded by a columned passage.

The kitchen was usually a very small room with a small counter of sorts and a wood-burning stove.

These typical ancient Roman buildings or homes were known as Domus. The inmates of the house were the great-grandparents, the grandparents, the parents, and kids of one family lived in one home living together. Homes were made of brick with red tile roofs.

The windows and balconies of the house faced the courtyard and not the street in order to ensure the safety of the homes.