Early Italian houses grouped around the Roman Atrium, with a small garden, the so-called hiatus, at the back. The classic Roman house, however, was divided into two parts. 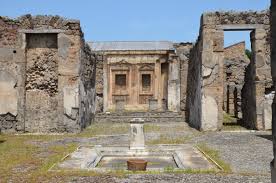 Beyond an atrium was a second open courtyard known as a peristyle. This area included a garden and it also had rooms opening up off of it. In the homes of the wealthy, the gardens served as a meeting point so they were designed to be shady and comfortable so that people could meet in them regardless of whether the sun was fierce.

The atrium in ancient Rome and the Peristylium were perfect adaptions to the heat of the Mediterranean. They were open to the sky, letting fresh air in to circulate among the corridors and rooms.

In the atrium a small pool, the impluvium would catch the rainwater, whereas, in the Peristylium, the rain would water the plants. 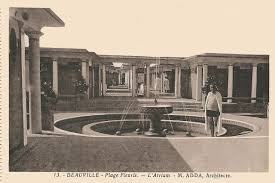 The atrium in Rome was originally the bedroom of the mother of the family in an old Latin household. Hence a bed Lectus Genialis stood opposite the main entrance. The Romans kept the bed standing, as a symbol of the sanctity of marriage (the bride was still placed upon it by the groom as part of the marriage ceremony).

But to them, it served only symbolic use. A further symbol connected with the atrium was the hearth. In early houses the hearth, which all its symbolism of homeliness, was situated in the atrium the center of the house and domestic life.

In the apartment houses or flats, an entire family (grandparents, parents, and children) might all be crowded into one room, without running water. They had to haul their water in from public facilities.

Rich family homes were very different. The rich lived in single-story houses which were built around a central hall, the atrium. Atrium had rooms opening up off of them and they were also open to the weather as they had no roofs. Many atriums had a trough built into their design so that water could be collected when it rained.

An interesting thing to note about the layout of the Roman house is that the names given to the front part of the house around the atrium are Latin, whereas those in the back are largely Greek.

As the centerpiece of the house, ‘The Atrium’ was the most lavishly furnished room. Also, it contained the little chapel to the ancestral spirits (Lararium), the household safe (area) and sometimes a bust of the master of the house.