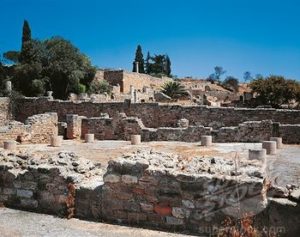 Marble was among the most popularly used material for construction. Marble was used to making the primary building and many more buildings were also constructed on the same lines later on.

In the small-scale architecture, the strength of the concrete was inspired by the colonize screen and there was also a row of some decorative columns. These columns were in front of the load bearing wall.

The roman architectures were the people who invented the Roman concrete. The concrete was used when the building could stand on its own and when it could also bear a large amount of weight. The first evidence of the use of the concrete by the Romans was in the town of Cosa. This was done sometime around 273 BC.

The ancient Romans used a mixture of a number of things like the lime mortar, pozzolana, water, stones and lime mortar.

Most the ancient buildings have been made using the wooden frame. This helped in hardening and it also provided with a border and thus the stones and the bricks were bound well together.

After some time the frame was removed and then it was observed that the new wall with the rough surface has been quite strong and sturdy. Later on, the surface of this was made smoother with the help of some attractive and thin pieces of marbles of different colors.

The materials that were used for construction were quite easily available and thus transportation of these materials was not an issue. The wooden frames were of great use because they could be used more than once. Thus the builders could work quite effectively and also at the same time quite quickly.