The ancient Roman earrings had a great significance in the jewelry in Rome. Fifth century BC to fourth BC was the period that is during the ancient Greek and the Roman and Hellenistic antiquity, witnessed the creation of most artistic and attractive jewelry pieces. These jewelry pieces are now found in the museums and the designs of most of these pieces are now remolded into Gold and Silver for sale. 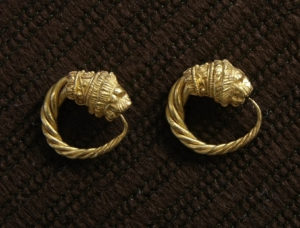 Romans were fanatic about the jewelry. Earrings were the most commonly worn part of jewelry in the ancient Rome. As per the jewelry conventions of the Romans, the adult male citizens were bound to wear only one item of jewelry and preferably a ring. A brooch or a fastener for the cloak that the male wore, accompanied with the ring was considered as a decent practice though.

Unlike the male Roman citizens, female Roman citizens wore a wide range of jewelry made of Gold. Silver and some studded with precious stones. Gold coins with various impressions formed a part of the Roman jewelry.

The upper-class senators and the equities along with the legionary tribunes wore golden earrings. The Roman landowners, the plebeians wore iron earrings. They could wear Golden earrings only when they were presented with them as a reward for their bravery in war or were rewarded for extraordinary services. In the Roman Empire, the policies regarding wearing golden rings were more liberally convened. Finally, the right to wear Gold was given to the Roman citizens by Justinian. 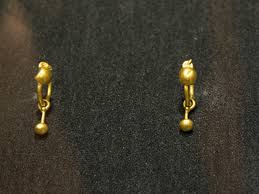 In the Roman civilization, jewelry was mainly used for assembling or fastening the clothing rather than for beautification. The jewelry was a medium to recognize a person’s status in the society. In the ancient Rome, the artisans and the jewelers used gold to create attractive jewelry pieces or adornments. Next, to gold, silver was most commonly used to make jewelry, especially the earrings.

The Silver earrings studded with precious stones were well in demand during fourth century BC. The lesser expensive jewelry was made of bronze, Roman glass, bone beads, etc. The Roman jewelry also comprised precious gemstones. These were found during the excavations at Persia, Indus valley, farthest East.

Earrings that were made of Diamond, Emerald and Sapphire have their origin in the silk route but were later found in the Roman empires to sooth the royal and rich masses of Roman civilization.

The earrings in ancient Roman times were mostly big sized that was too catchy. These earrings revealed the status of the person in the society. The Roman earrings mostly comprised a big gemstone and these were used by the bureaucrats and the royal mighty civilians. The Roman glass was also used sometimes, to embed in the earrings. The iron earrings that were mostly worn by the common middlemen or the Plebeians were made with very bold and artistic designs.

Although the men were abided by the rules and conventions of wearing jewelry as per their status in the society, Roma women had the liberty to adorn beautify themselves with gold, gem-studded jewelry. Ancient Roman women wore a variety of gold, silver and bronze earrings carved into fascinating designs and studded with gems or Roman glass.