Gaius Suetonius Tranquillus (Suetonius) was most famous for his biographies of the Julio-Claudian and Flavian emperors and other notable historical figures. He was born around 70 to an equestrian family. Living during the times of Emperor Trajan and having a connection to Pliny the Younger, Suetonius was able to begin a rise in rank in the imperial administration. 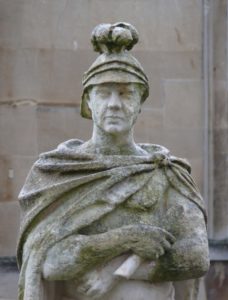 Around 102, he was appointed to a military tribune position in Britain, which he did not accept. During the late period of Trajan’s rule and under Hadrian, he held various positions, until he was discharged. He had a close proximity to the government as well as access to the imperial archives, which can be seen in his historical biographies.

Roman Historians Suetonius wrote a large number of biographies on important literary figures of the past (De Viris Illustribus). Included in the collection were notable poets, grammarians, orators, historians, and philosophers.

This collection, like his other works, was not organized chronologically. Not all of it has survived to the present day, but there are a number of references in other sources to attribute fragments to this collection.

His most famous work, though, was the De Vita Caesarum. This collection of twelve biographies tells the lives of the Julio-Claudian and Flavian Emperors, spanning from Julius Caesar to Domitian.

Other than an introduction genealogy and a short summary of the subject’s youth and death, the biographies do not follow a chronological pattern. Rather than chronicling events as they happened in time, Suetonius presents them thematically.

This style allowed him to compare the achievements and downfalls of each emperor using various examples of imperial responsibilities, such as building projects and public entertainment. However, it makes dating aspects of each emperor’s life and the events of the early Roman Empire difficult.

Suetonius’s style was simple, he often quotes directly from sources that were used, and artistic organization and language do not seem to exist. He addressed points directly, without flowery or misleading language, and quotes from his sources often.

However, he was often criticized that he was more interested in the interesting stories about the emperors and not about the actual occurrences of their reigns.

The style, with which he wrote, primarily stemmed from his overarching purpose, to catalog the lives of his subjects. His goal was the evaluation of the emperors, portraying the events and actions of the person while they were in office.

He focused on the fulfillment of duties, criticizing those that did not live up to expectations, and praising bad emperors for times when they did fulfill their duties. There are a variety of other lost or incomplete works by Suetonius, many of which describe areas of culture and society, like the Roman Year or the names of seas.