Julius Caesar was born on July 12, 100 BC into a patrician family. As a young man, he was given the position of the Flamen Dialis by his father-in-law, Cornelius Cinna. When that position was taken away by Sulla, Caesar spent a decade in Asia, earning a great reputation in the military. When he returned back to Rome, he was both elected tribunes Militium and conferred the title of Pontifex.

During his time in these positions, Caesar befriended Pompey and Crassus, the two men with whom he would later form the First Triumvirate. As the years went on, recognition for Caesar’s political, military, and oratory skills grew and he easily earned the positions of praetor and consul.

After his consulship, Caesar gained control of the provinces of Illyricum and Cisalpine and Transalpine Gaul. In 58 BC, trouble arose in the Gallic provinces, sparking one of the most important wars of Caesar’s career.

His argument was that the Wars were both just and pious and that he and his army attacked Gaul in self-defense. By creating an account that portrays himself as a superb military hero, Caesar was able to clear all doubts in Rome about his abilities as a leader.

While it is obvious that Caesar used this account for his own gain, it cannot be inferred that the De Bello Gallico was completely unreliable. Many of the victories that Caesar has written about did actually occur. Minute details, however, may have been altered, and the word choice made the reader more sympathetic to Caesar’s cause.

De Bello Gallico was an excellent example of the ways in which retellings of actual events can be spun to a person’s advantage and hence it is for this reason that De Bello Gallico is often looked at as a commentary, rather than a piece of actual historiography.

Titus Livius was commonly also known as Livy. He was a Roman historian best known for his work entitled ‘Ab Urbe Condita,’ which dealt with the history of Rome. He was born in Patavium, which is modern-day Padua, in 59 BC and he died there in AD 17.

Others referred to his writing as having “Patavinity.” Little is known about his life, but based on an epitaph found in Padua, he had a wife and two sons. Additionally, we could also infer that he was on good terms with Augustus and also encouraged Claudius to write history.

Ab Urbe Condita covered Roman history from its founding, commonly accepted as 753 BC, to 9 BC. It consisted of 142 books, though only the first ten and books 21-45 survive, as well as a few other fragments. The books were referred to as “decades” because ten books could fit into a parchment codex. The decades were further split in pentads:

The purpose of writing Ab Urbe Condita was twofold: the first was to memorialize history and the second was to challenge this generation to rise to that same level. He was preoccupied with morality, using history as a moral essay. He connects a nation’s success with its high level of morality, and conversely a nation’s failure with its moral decline. 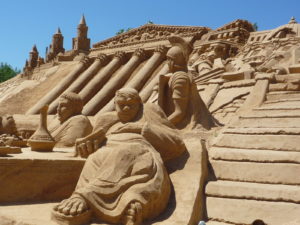 Roman Historians Julius Caesar Livy believed that there had been a moral decline in Rome, and he lacked the confidence that Augustus could reverse it. Though he shared Augustus’ ideals, he was not a “spokesman for the regime”. He believed that Augustus was necessary, but only as a short-term measure.

According to Quintilian, Livy wrote with “milky richness.” He used language to embellish his material, including the use of both poetical and archaic words. He included many anachronisms in his work, such as tribunes having the power that they did not have until much later. Roman Historians Julius Caesar Livy also used rhetorical elaborations, such as attributing speeches to characters whose speeches could not possibly be known.