The early Roman diet consisted of meat, wild fruits, nuts and some fish. Appetisers would be made up mainly of fruit and nuts and would include, for example, melon drizzled with honey, pear soufflé (made with eggs), seafood cooked with leeks in white wine, and white fish cooked with raisins.

The Roman dinner (Cena), the main meal of the day, would be accompanied by wine, usually well-watered. The Latin poet Horace ate a meal of onions, porridge, and pancake. An ordinary upper-class dinner would include meat, vegetable, egg, and fruit. Comissatio was a final wine course at dinner’s end.

For dessert, the Romans enjoyed something sweet.The following is a delicious sweet cake/bread made with rosemary:

In a bowl, mix all dry ingredients. Next, combine the juice concentrate, the egg, the honey, and the milk. Blend well, but do not beat. Pour into a greased 9-inch round cake pan and bake at 375 degrees for about 30 minutes. Pour a little honey on top of the finished cake and sprinkle with chopped almonds.

Recipe for a dinner meal 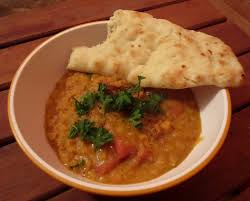 Wash the lentils and put them into a saucepan with 2 liters of cold water. Bring to the boil, and skim off the scum. When the water has cleared, add the leek and half of the fresh coriander. Grind the spices and the other herbs, and add them with the garum, vinegar, and defrutum to the pan.

Let the lentils simmer until they are almost cooked. Check the pan every now and then to ensure that the water has not evaporated. At the last minute add the olive oil, the freshly ground pepper and the remainder of the chopped coriander.