Ancient Roman Executions: Death by crushing or pressing is a method of execution that has a long history during which the techniques used varied greatly from place to place. This form of execution is no longer sanctioned by any governing body. The Romans and Carthaginians used this method on occasion.

Roman executions were performed in many different ways. A slave who had been accused of raping a Roman citizen was usually unaware of the gruesome details of the fate that awaited him when his time came to be executed (slaves were rarely allowed to attend the private game), as the magistrate against him would simply pass a sentence of execution. 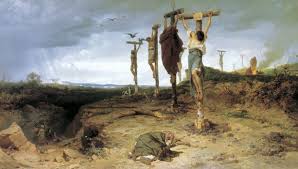 Roman Executions at the Colosseum

As part of the opening of the Colosseum, a play was held in which an unfortunate criminal, in the role of the pirate Lareolus, was crucified in the arena. Once he had been nailed to the cross, an enraged bear was let loose, who tore his body to shreds.

The official poet who described the scene went into great detail to describe how what alas was left of the poor wretch did no longer resemble a human body in any shape or form.

Public executions of criminals formed part of the Circenses. The perhaps most popular forms of such executions in the circus were spectacles which were mock plays and ended in the death of the leading ‘actor’. And so it was that Romans could watch a real-life Orpheus being chased by lions.

The lower class was made up of all of the poor in Rome, from slaves to Roman citizens. They did not have it nearly as easy as did their upper-class counterparts concerning punishments for crimes. They were subject to all penalties, even crucifixion, though Roman citizens were not often crucified.

They were regularly punished far more harshly than were the upper classes for the same crimes. For example, there are many recorded incidents in which lower-class citizens were sentenced to death or to labor while the upper-class citizens, having committed the same crime, merely had a third or a half portion of their property confiscated, or they were exiled.

In Roman mythology, Tarpeia was a Roman maiden who betrayed the city of Rome to the Sabines in exchange for what she thought would be a reward of jewelry. She was instead crushed to death and her body cast from the Tarpeian Rock which now bears her name.

In ancient Rome, a Vestal Virgin convicted of violating her vows of celibacy was “buried alive” by being sealed in a cave with a small amount of bread and water, ostensibly so that the goddess Vesta could save her should she have been truly innocent.

More info on- roman crimes and their punishments