The Roman Eagle was the symbol of the mighty Roman Empire, of the Roman emperors such as Caesar, as well as a mythological symbol representing the Greek god Zeus. It appears frequently in the ancient Greek art, Hellenistic art, and Roman art. 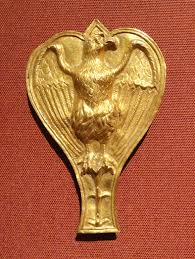 Under the eagle or other emblem was often placed ahead of the reigning emperor, which was to the army the object of idolatrous adoration. The name of the emperor, or of him who was acknowledged as emperor, was sometimes inscribed in the same situation.

The silver eagle was the ensign of the Roman Legion and the symbol of its power. The Legatus was the officer in charge, and he would assign an Aquilifer who was the soldier that would carry the Aquila (eagle) into battle. If the eagle was captured the legion would disband.

The eagle was the emblem of the Roman emperors and legions and also Jupiter’s (Roman version of Zeus) bird. This same eagle could also be interpreted as the Phoenix, with many Christians believing Christ to be phoenix-like, through his resurrection story. 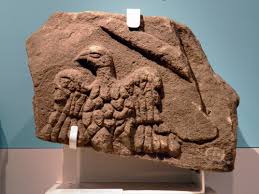 The Roman ensigns had on their top an eagle representing Rome. These symbols were held high by a special group of soldiers and during the battles, they indicated the location of the commanding officers and they gave reassurance to the Roman legionaries.

The choice of the eagle as the symbol of command was widespread among ancient civilizations. In Rome, according to the legend, this choice was due to the fact that Romulus, the founder of Rome, first saw an eagle, when he was competing (in a sort of modern bird-watching exercise) with his brother Remus for who should be the founder of the new town.

Eagle was the most prominent fixture or symbol throughout the Roman Empire intending to remind everyone as to who was in power and it preceded all Roman armies when marching to and from battle. 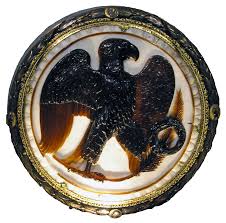 But, the ritual use of the Apron has a much earlier history than these. The Bible mentions a garment worn by the High Priest, called the Ephod, described as an apron or skirt covering the body from the waist down, and made of white linen with shoulder straps, possibly a bib.