Ancient Roman Dolls: Ancient Roman toys were all wide and varied as today’s toys are. Children back then used their imagination more, obviously, but the toys they used were based on real-life objects and themes.

The materials that made up the toys were those used in Ancient Rome but the style of play was the same as it is today. Boys played with wooden swords and sticks as they pretended to be soldiers. Girls played with dolls made from wood, rags, or wax. 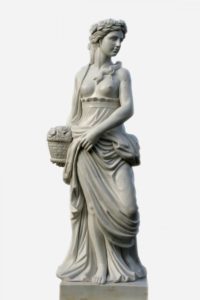 The girls in ancient Rome played with rags dolls and dolls of wax or clay. Some Roman Dolls even had jointed legs and arms. The girls played board and ball games and even lifted weights.

Playing with balls, board games, hobbyhorses, kites, tiny models of people and animals were sources of recreation for ancient Roman children. The ancient Romans played with hoops, with pieces of metal on them, like bells, to jingle and warn people in their way.

Boys walked on stilts and played games with balls. They played tic-tac-toe, and a game called “knucklebones”, which is a lot like jacks only played with bones.

The boys played war-type games. They played war and fought with wooden swords, quite fiercely. The game of “Troy” was a team thing involving resisting a whole pack of kids outnumbering you, who’d try to drag you across a line.

Ancient Roman toys were as wide and varied as Roman children’s own imagination. Also, as is to be expected, many toys mimicked real-life grown-up situations which the children would one day find themselves actually living; for example dolls for girls or wooden swords and horses for boys.

The toys available would also depend on the child’s own social rank in Roman society and time available. Children born into slavery may well find themselves working in the fields or helping in the household at a very early age. Common toys, games, and pastimes would include wooden, wax or terracotta dolls.

The ancient Romans loved games. Horace tells of children building small houses, riding on hobbyhorses, and hitching mice to little carts. Kids from poor families had to work a great deal, but they still found a little time to play. Kids from wealthy families did not work or help around the house. They had slaves who did all the work for them, so they had lots of time to play.

In pets, dogs were common and favorites. Many kinds of birds were pets including pigeons, ducks, quail, and geese. Monkeys were known but they were not very common. Cats started to become pets around 1c CE.

Both boys and girls played with a wooden hoop. The hoop would have bells on it and the children would roll them along the streets and playgrounds. Other popular toys at the time were balls, board games, hobby horses, kites, and wooden replicas of people and animals.