In the ancient Roman times, the holidays were meant in order to worship and pray to some God. Most of the Roman celebrations and festivals were about some religious tradition. The celebrations were accompanied by a large-scale feast and this feast was accompanied by lots of games.

The most important festivals of those times included Saturnalia, the Consualia, and the Lupercalia. The source for the ancient Roman holidays has been obtained from the Ovid’s Fasti. This is a poem that has documents about the festivals in details. This majorly contains festivals that are celebrated between the months of January and July.

Each year the festival dates were decided and they formed a part of the Roman calendar.

There is an example that has been mentioned in the Livy reports. In the Livy reports there is a mention of the Roman destruction that happened of Alba Longa. This happened in the 7th century BC. And in order to remove the Alban population, it has been reported that stones almost rained on the Mons Albanus. 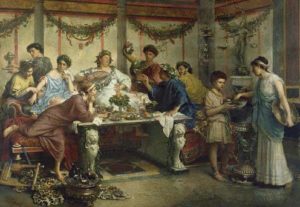 When the Roman reporter went to investigate, the shower of stones was actually witnessed. Roman observed this and slowly everyone in Rome came to know about it and very soon people took this as a sign that depicted the displeasure of the Alban Gods. With the evacuation of the Alba Longa, the worshipping had also abandoned. This is how Livy says that Roman started and instituted a festival which was a length of nine days.

It then became a longstanding practice that people followed that whenever there were any reports of stone throwing, people would observe the nine-day festival.

Some of the festivals of the Roman era are as follows:

In the month of Ianuarius

In the month of Februarius

In the month of Martius

In the month of Aprilis