The ancient Romans loved celebrations. They especially enjoyed a holiday they celebrated around the 25th of December. The Romans feasted, gave gifts, were merry, and decorated their homes with greenery. Roman Festivals were also held in ancient Rome in response to particular events, or for a particular purpose such as to assuage or to honor the gods. 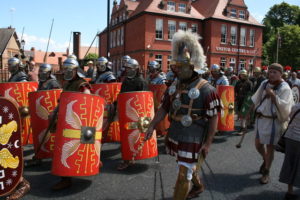 The Floralia festival began in Rome in 240 or 238 B.C. when the temple to Flora was dedicated, to please the goddess Flora into protecting the blossoms. 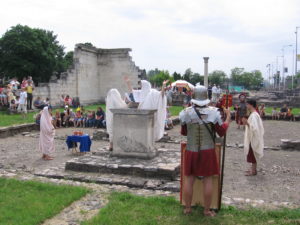 The Floralia fell out of favor and was discontinued until 173 B.C., when the Senate, concerned with wind, hail, and other damage to the flowers, ordered Flora’s celebration reinstated as the Ludi Florales.

The Roman Festivals for Anna Parenna, “goddess of the returning year” was held each year on the first day of the ancient year. Traditionally, Romans would cross the Tiber and “go abroad” into Etruria and have picnics in flimsy tents or huts made of branches. 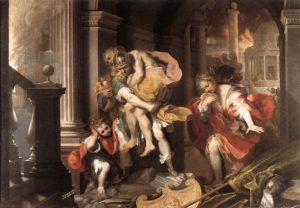 Both men and women would drink as much alcohol as they could, for it was thought that one would live for as many years as cups of alcohol one could drink on this day.

Lucario is an ancient Roman feast, solemnized in the woods, where the Romans, defeated and pursued by the Gauls in year 390 BC, retired and concealed themselves; it was held in a wood between the Tyber and the road called Via Salaria.

The Fornacalia festival, also called Feast of Ovens, was held before February 17, the day of the Quirinalia festival of the ancient Roman god Quirinus.

The Fornacalia holiday rituals were carried out mainly by the curiae, tribal divisions of Rome, celebrated in February on different days, one day for each of the curiae and one for the state.

The holiday of Saturnalia

The holiday of Saturnalia was celebrated between 17th December and 3rd January, a period of semi-lawlessness where dispensing of punishments suspended and courts closed, business stopped and all wars ceased.

Families gathered together to share the spiritual renewal in the symbolic rebirth of the Divine and to welcome a new year. People shared feasts with friends, overindulged themselves, gave gifts, and decorated their homes with festive greenery.

Lupercalia was Purification and fertility festival. Romans not certain to which god holiday was dedicated. Citizens gathered before the cave where Romulus and Remus were suckled by the she-wolf. A goat and dog were sacrificed. 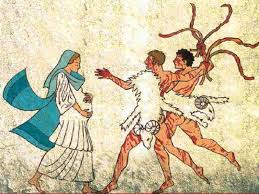 Two noble youths were smeared with the blood and ran through the streets. They whipped passers-by with strips of goatskin, imparting fertility.