The arch was a structure that covered the distance between two pillars. These arches were helpful in supporting the weight of the building. The arch structure was used by the Romans in constructing buildings utilized for public and private purposes. 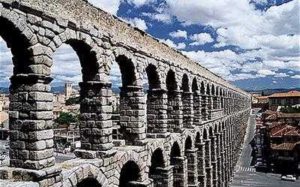 The influence of architecture of both the Etruscans and the Greeks led the Romans to adopt the arch as a part of their own architecture. Though the idea of building an arch had been in existence even before the ancient Roman Empire period, it was the Romans who extensively used arches in their architecture. 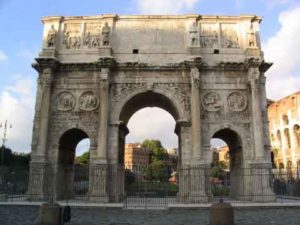 The architectural style of using an arch enabled the Romans to build magnificent structures by using simple materials. The most common material used for constructing arches was bricked.

Some of the illustrations of brick arches are the Imperial Palace, the temples of Peace, Venus and Rome, the baths like Titus, Caracalla, and Diocletian. The use of arch also led the Romans to construct aqueducts. In fact, one of the early uses of the arches was for building the Roman aqueducts.

The aqueducts were a transporting mechanism which was used to carry water to distant areas. Aqueduct of Segovia, Aqua Claudia, and Anio Novus are some examples of the ancient Roman aqueducts.

The Triumphal Arch is regarded as an innovation in the ancient Roman architectural style and similar designs were used to construct the Amphitheaters and Aqueducts. The Arch of Constantine is another example of a structure having a wonderful arch. During the ancient Roman period, the arches built on structures where they could not be easily seen.

The vaulted arch was another interesting aspect of the ancient Roman architecture. The vaulted arches were made from concrete and it also provided the extra support and strength to the building. These types of arch ceilings were very strong in comparison to the normal ceilings.

The best example of vaulted arch during the ancient Roman period was the Colosseum. The vaulted arches were commonly used and it helped the Romans construct many buildings that were used for public purposes like, for public baths and basilicas.

It is believed that the religion played a crucial role in deciding the type of architecture necessary for a building. Pantheon was an illustration of a structure which was built to suit the religious requirements. The impact of the ancient Roman architecture and especially the arches is such that they are still used while constructing modern day buildings.