Roman aqueducts, a highly developed waterway system was indeed an important ancient innovation. A civilization which began as a small agricultural community became one of the greatest of the ancient empires. Romans were known as the greatest aqueduct builders of the ancient world. They stand testimony to the Roman engineering skills. Today, aqueducts refer to a system of pipes and canals used to transport water. 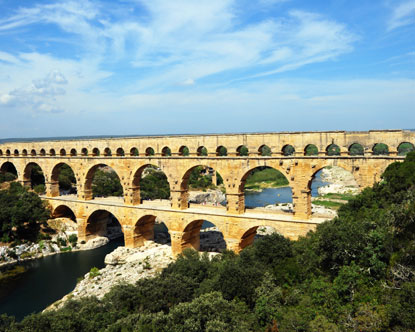 What are Roman Aqueducts

The word ‘aqueduct’ evolved from Latin where aqua meant water and ductus meant channel. These splendid structures came into play when the first sources of water like the Thebes could not satisfy the increasing needs of the Roman population. Most Roman towns had at least one aqueduct. Initially, small ones and later huge aqueducts featuring arches and pillars were built. They were also built underground.

How were Roman Aqueducts Built

The date of the first recorded aqueduct in Rome was in the year 312 B.C. From 312 BC to AD 226, 11 aqueducts were built to bring water to Rome from as far away as 57 miles. Aqua Appia, Aqua Nova, Aqua Alexandria and Aqua Virgo were some of them.

One of the famous aqueducts was completed by King Claudiu and was called the Claudine aqueduct. The Colosseum Amphitheatre was provided with water via the Aqua Claudia aqueduct and distributed through free-flowing canals, lead and terra-cotta pipes to storage reservoirs and then through lead pipes.

The aqueducts were built from a combination of stone, brick, and cement made from volcanic materials called pozzuolana. The channels or waterways were built through rocks. The large water cisterns held the water for the city and they were connected to a large number of lead pipes.

How did Roman Aqueducts Work

Let us see how these aqueducts worked. The water in the aqueducts ran gently through concrete channels. Multi-tiered viaducts were developed by Roman engineers to cross low areas. Water from the aqueducts passed into large, covered catch-basins in designed to deposit their sediment.

The water from the catch-basins was distributed through free-flowing canals, lead and terra-cotta pipes to storage reservoirs and then through lead pipes, to the people. A waste-water collection system discharged the waste into the drains or sewer system. Thebes River was the main outlet of the initial drainage system.

Aqueducts were not cheap, but the Romans were willing to spend on them. Constructing and maintaining the water system was also not easy. Curator Aquarium was appointed to supervise it and workers and slaves were responsible for construction.

Methods of construction of ancient Roman aqueducts have been described by Vitruvius of the first century BC in the book De Architectura. Many of the aqueducts of Rome are preserved and open to tourists today.