In the early days of the Roman Republic, military tactics were influenced by the methods used by the successful Greek Army. The combat formation used by the Greeks and Romans was called the phalanx. 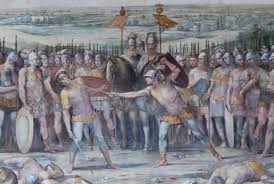 This involved the soldiers standing side by side in ranks. Just before contact with the enemy, the soldiers moved in very close together so that each man’s shield helped to protect the man on his left.

In battle, the Roman soldiers would stand with the shields in front side by side, and in the rows behind, with the shields on top of the heads of the ones in front. It made an advancing group of Romans a giant tortoise, and less vulnerable to artillery fire. This also made the group of soldiers a giant wall that couldn’t be broken without many casualties.

The battle tactics of ancient Rome were gradually refined with time as the types of terrain and enemies changes. The great ability of ancient Rome was that of learning from mistakes and picking up the best of what the enemy had to teach.

During a fierce battle, a soldier can get easily get tired. The Romans found an effective solution to this. A soldier would only be at the front of a fighting column for fifteen minutes, then move to the back. This was invaluable to the soldiers.

There is an advantage of height over the enemy and if you are pitting infantry against cavalry, the rougher the ground the better. The sun should be behind you to dazzle the enemy. If there is strong wind it should blow away from you, giving an advantage to your missiles and blinding the enemy with dust.

With only about three feet between the rows of soldiers, the Romans would move towards the enemy. The phalanx was a very difficult barrier to break through. If a man in the front was killed, he was replaced by the man behind.

The shields would not only be used to protect the soldiers but to push the enemy soldiers to the ground or to make them break ranks.

This doesn’t mean that ancient Rome’s battle tactics were always the best and in fact, one of the textbook examples of battle tactics comes from one of Rome’s greatest adversaries: the Carthaginian general Hannibal. 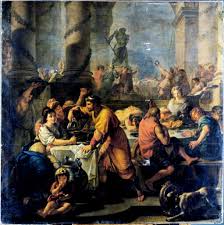 The battles he fought against the Romans and particularly that fought at Cannae brought such a resounding defeat for the Romans that it lived on in popular minds as one of the most horrific events which had befallen them.

Hannibal’s victories soon gave away the Romans’ weakness: their cavalry which hitherto had generally been made up of inexperienced noblemen rich enough to be of “Equestrian” rank. Roman strength generally lay in its infantry and clearly, this tended to shape their tactics.