The Roman war machines are also greatly renowned. Much of it was copied from peoples such as the Greeks and later improved to the nth degree so as to increase their firepower as well as to reduce the time within which they could be constructed. 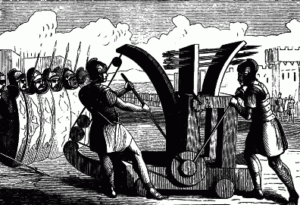 The Romans invented war machines, like catapults, worked by twisted ropes and springs.

These early Roman War Machines probably fired arrows from a bow not much stronger than one a man could draw. By mechanizing the drawing and releasing of the arrow, however, the catapult inventors made possible the construction of much more powerful bows. 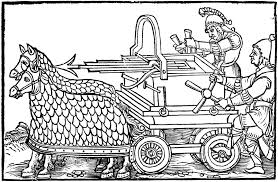 These devices appear to have been built of composite materials, with a wood core surmounted by a tension layer of animal sinew in the front and a compression layer of the horn in the back. Forcing back the slider on the first catapults was probably done by hand, but before long the size and power of the machines called for a winch.

The offensive tools consist of two types of weaponry. The first is the javelin. The javelins were constructed to bend once inside the enemy, that way the enemy could not pull them out or reuse them for their own needs. The second offensive weapon the soldier was equipped with was the Gladius. This was the basic short sword that was good for close attacks.

The longest recorded range for a catapult firing an arrow of the ordinary size, about 70 centimeters, was about 640 meters, and there is some reason to believe the claim was not inflated. The maximum range for an archer was about 450 meters.

The Scorpio was similar to a crossbow of the later middle ages. It fired an arrow by pulling a strap back as far as it would go and letting it go.

The ballista was similar to a catapult. It flung large rocks over walls of a town. It was also fired by pulling back a strap.

The catapult is probably the most famous of the four. It had a spring which was coiled and released and caused the rock to fly through the air and inflict injuries on the enemy. 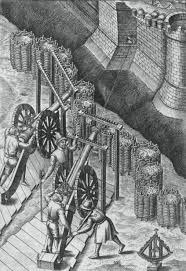 The ability of Roman military engineers to construct such machines and structures from scratch using whatever materials might be present locally is well recorded. An example of their ability is the speed with which Julius Caesar’s troops were able to build a Roman bridge over the river Rhine. This ability was so astounding as to often catch their enemies by surprise to devastating effect.