Of all the weapons invented by the Greeks, a few found great favor with the ancient Romans. The Roman catapults were one such weapon invented by the Greeks. It was a weapon of siege. The original weapon was adapted and modified by the Romans. A catapult is a type of artillery. It threw ammunitions of large volume to targets from a distance of half a mile or more.

The ammunition of choice was large rocks and boulders. The size of these rocks could be as big as seventy-eight kilograms though the average size ranged between thirteen and twenty-six kilograms. Some varieties of catapult threw fire darts of a length of twelve feet. These were called the fire throwers. 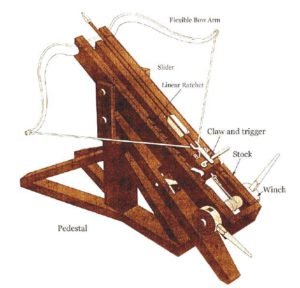 The catapult was made of both wooden and metallic parts. The basic necessity was a large wooden beam or stock. It acted as the central axis. On top of it was a dovetail groove along which a slider moved back and forth.

In the front was a tension layer, generally formed of animal sinew. At the rear surface of the slider were a claw and trigger arrangement. In front of the claw and above the slider was a trough. Here the ammunition was placed prior to firing.

The slider was run forward till the claw could grasp the bowstring. It was then pulled back, thus creating tension. At the maximum limit, the strings were released. The huge release of force caused the missile to fly out at great speed. So the weapon used the force of torsion to fire the ammunition.

The design of the catapults varied. Some were vast and could fire very heavy ammunitions while others could be carried by a single soldier. They were sometimes mounted on wheels to increase their accuracy. 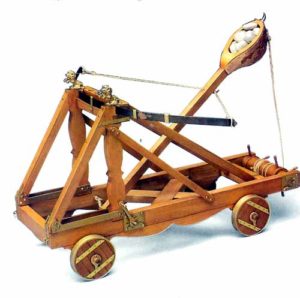 In fact, they were extremely accurate and had a range of about six hundred and forty meters. The catapults were a great help in the expansion of the Roman Empire. It became almost impossible to resist them for a prolonged period of time.

Almost all sieges carried out with the catapult were successful. The weapon was fired during the day to locate the weak spots of the enemies. Then they were kept loaded and ready. At night the weapon was fired at the same spot, creating terror and confusion among the enemy. The weapon thus definitely shifted the fortunes of war in favor of the attackers and offense.