According to the late Roman writer Vegetius, in his work De Re Militari, he stated that the missile weapons of the infantry were the Roman Spears Javelins headed with a triangular sharp iron, eleven inches or 279 mm or a foot long, and were called piles. When once fixed in the shield it was impossible to draw them out and when thrown with force and skill, they penetrated the cuirass without difficulty.

Subsequently, in the same work, he also stated that they had likewise two other javelins, the largest of which was composed of a staff five feet and a half long and a triangular head of iron nine inches or 229 mm long.

This was formerly called the pilum but was now known by the name spiculum. The soldiers were particularly exercised in the use of this weapon because when thrown with force and skill it often penetrated the shields of the foot and the cuirasses of the horse. 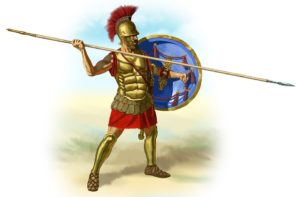 It can, however, be argued that a short iron shaft had very few confirmations from archeology. Vegetius wrote about a one-foot iron shaft because at Vegetius’ time the pilum had disappeared and been substituted by similar shorter weapons such as the Plumbatae or the above-mentioned spiculum.

As a result of the experimental archaeology, it was generally believed that the pilum’s design evolved to be armor-piercing: the pyramidal head would punch a small hole through an enemy shield allowing the thin shank to pass through and penetrate a distance sufficient to hit the man behind it. The thick wooden shaft provided the weight behind the punch.

In one description, one of the two iron nails that held the iron shaft in place was replaced with a weak wooden pin that would break on impact causing the shaft to twist sideways. Gaius Marius is sometimes given the credit for this modification.

It has been argued that subsequently pile were constructed so that the iron shank would bend on impact. Having penetrated a shield through a small hole and its shank having bent, such a pilum would now be more difficult to remove, and, of course, impossible to throw back. 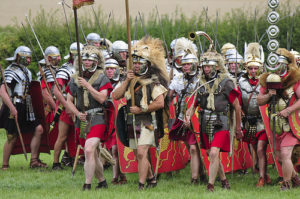 If the understandably-reluctant enemy did not discard his precious shield quickly enough, it could result in further complications and injury as there would be a great press from the men behind him.

Opinion among archaeologists once held that the main function of the shank was to disable both shields and the Pila itself by bending, but it is now thought that the pilum was a form of “personal artillery” designed simply to provide a massive counter-shock against any charging foe, and, as necessary, turn any legionary into a spearman.

The javelin too was one of the most important weapons of the Roman army.The word javelin comes from Middle English and it was derived from Old French Javeline, a diminutive of Javelot which meant spear.

The word Javelot probably originated from the Celtic language A javelin was a light spear designed primarily for casting as a ranged weapon. The javelin was almost always thrown by hand, unlike the arrow and slingshot, which are projectiles shot from a mechanism. However, hurling devices do exist to assist the javelin thrower in achieving greater distance.