Ancient Roman Senate House Foundation and Layout: Because the first Curia, the Curia Hostilia, was founded by the third legendary king of Rome, Tullus Hostilius, the plan was laid sacred and accuracy in shape had to be preserved. As for the reason to sanctify the ancient Roman Senate house. legend has it that the Senate was forbidden to vote a measure unless assembled inside a temple. 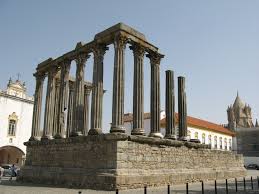 In Roman Senate House Foundation, Cicero called it the temple Inauguratum or the ‘Divine Temple.’ This building was so pious that foreign ambassadors and women were not permitted to enter. 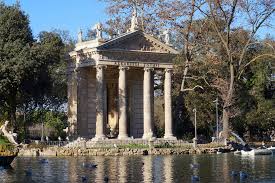 In addition, only senators, the senator’s sons, and their grandchildren were allowed inside, but since the doors were open during debates, people could listen to the discussions from within.

Sulla altered the layout by widening it during his own reign in 80 BC. He removed statues of Pythagoras and Alcibiades from their places at the corner of the Comitium and Curia. On its side wall, or at one side of it in the later curiae, was a painting of M. Valerius Messala’s victory over Hiero and the Carthaginians in 263 BC.

The Curia Hostilia was angrily destroyed. Fury abounded the Roman streets when in 54 BC, Clodius Pulcher was murdered by his nemesis, Milo, along with the Via Appia south of Rome. 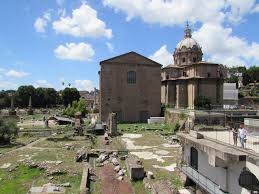 Fights broke out and a large group of Clodius’ followers, headed by a Claudius, carried their leader’s body to the Curia Hostilia, piled the furniture from inside to make a fire, and burned down the Curia Hostilia along with the Basilica Porcia.

By 50 BC, Dictator Julius Caesar prepared a new large Curia over the area of the Comitium just near the previously burned down senate building in a north to south angle. Scholars believe that he adjusted Faustus’ foundation (Roman Senate House Foundation) and worked upon what Faustus already built so that the new Curia would not be called the Curia Cornelia after Sulla’s family, but the Curia Julia after Caesar. 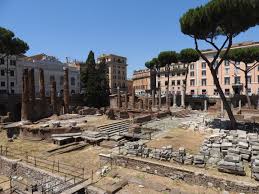 It was not until a year after his assassination, though, that the Curia was continued by the Second Triumvirate. The second Curia for the Roman Forum was completed and dedicated to Caesar in 29 BC by Augustus.

Augustus not only continued the construction of Curia Julia but he also added the Chalcidicum on the right side. Bartoli believed that the Chalcidicum held the offices and archives for the writing and preservation of the Senate decrees including records of honorable dismissal of legionaries, but the ancient sources cannot explain the buildings primary use as of yet. Domitian restored the curia in 94 AD as it still was partially damaged by the fire of Nero in 66 AD.

It came as no doubt that Domitian took as this opportunity of dedicating the Chalcidicum to his patron goddess Minerva when it acquired the name of Atrium Minervae. It was a court surrounded by a colonnade. The atrium was still visible into the 16th century until Sixtus V established the Via Bonella dividing the S. Martina e Luca from the S. Adriano.

The site also contained a smaller hall for committee meetings called the Secretarium Senatus and adjoining rooms beside the large assembly room. The Secretarium Senatus probably also formed part of the structure of Augustus, though there is no direct evidence of its existence before the time of Diocletian. 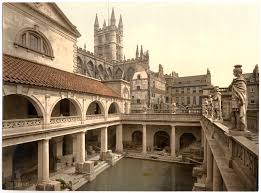 A city perfect in 412 AD restored it after the serious damage from the Gothic invasion under King Alaric. It was opposite for the protection of these buildings that they were transformed into Christian churches early in the Roman Empire’s collapse.

Pope Honorius I (625-38) dedicated the Curia Julia to the martyr Hadrianus of Nicomedia and the Secretarium probably not much later to the martyred Roman virgin, Martina. By the 1800s, the Santa Martina was now a crypt and a full story above the original church was the Santa Luca. They were eventually combined in name and commonly called the church of Santa Martina e Luca.