Tacitus was born around 56 AD. After arriving in Rome, which was believed to have happened by AD 75, he quickly began to lay down the tracks for his political career. 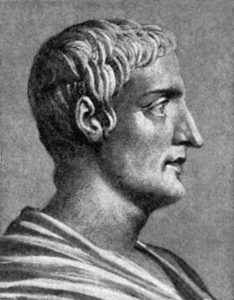 By 88, he was made praetor under Domitian, and he was also a member of the Quindecimviri Sacris Faciundis. From 89 to 93, Tacitus was away from Rome with his newly married wife, the daughter of the general Agricola. 97 saw Tacitus being named the consul Suffectus under Nerva. His death is datable to c. 118.

Tacitus’ style was very much like that of Sallust. Short, sharp phrases cut right to the point, and Tacitus makes no bones about conveying his point. His claim that he wrote history “sine ira et studio” (“without anger and partiality”) was not exactly one which is true. Many of his passages ooze with hatred towards the emperors.

Despite this seemingly obvious partisan style of writing, much of what is said can go under the radar, which is as Tacitus wanted things to be. His skill as an orator, which was praised by his good friend Pliny, no doubt contributes to his supreme mastery of the Latin language.