Ancient Roman Helmets: The infantry of Rome wore heavy armor consisting of helmet, breastplate, greaves on the right leg, and on the left arm a buckler.

Helmets were usually had a knob or spike designed for the joining of crests as well as very often having tubes attached to the side of the bowl of the helmet for feathers. 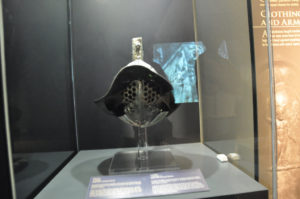 Helmets of the commander in Ancient Rome

The Roman helmets of the commanders were anointed by a crest which was usually of horse-hair or feathers made designed to give an imposing look and making the commander seem taller which helped the commanders appear more commanding.

The crests were joined to the Roman helmets by a central support called a crest block or plume holder. Later Roman helmets were designed with an iron band running the whole length of the helmet from front to back with a gap to insert the crest. Italic and Gallic forms of helmets had fittings to enable the attachment of decorative crests, by differing means, either slot or twist. 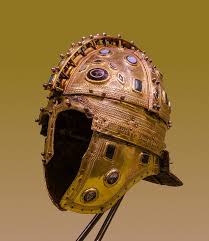 The crests were not just ornamental but also helped to distinguish the centurions from each other. The centurions wore a transverse crest, meaning that it ran from side to side across his helmet.

It is believed that centurions wore these crests in battle during the early Empire as the crests served as a visual reference and rallying point for their men. Lower ranking soldiers only wore the crests for special occasions such as parades or triumphs. 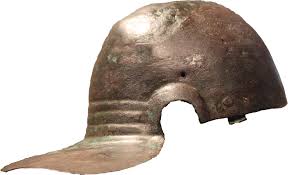 The colors used for crests of Roman helmets are believed to include red, purple, black, white and yellow, although in the art they always appear to be shown as red.

There were many different types of Helmets during ancient Roman times. The can be divided into the following types:

Montefortino Helmets were the earliest styles of ancient Roman helmets and worn by the soldiers in the armies of the Republic from the 4th century BC to the 1st century BC. They were derived from Celtic helmets. 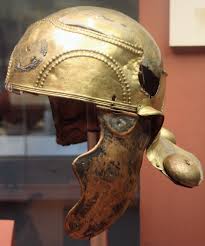 These helmets were conical in shape and brass. The Montefortino helmets had a small extension at the back as a neck guard. They normally have a plug-in plume holder on the crown of the helmet.

These ancient Roman helmets were based on a Gallic form of helmet made in the Coolus district of Marne. The Coolus pattern helmet was made of bronze or copper alloy. The bowl of the Coolus Roman helmet had a rounded shape with a projecting neck guard and a big angular cheek piece. Most had a simple spike as a plug-in plume or crest holder. 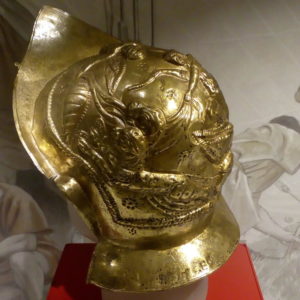 Ear protectors are provided and separately attached. They had a re-enforced peak, cheek pieces and a ridged extension at the back as a neck-guard. Mainly made of iron and with with brass decorations. Substantial “hot cross bun” style crossbars were added to these helmets providing additional protection.

Imperial Italic Helmets were worn late 1st BC – early 3rd century and similar in style to the Gallic helmets. A sloped neck guard with ribbing at the nape, projecting ear guards, brass trim, and decorative bosses.