The ancient Romans were no exception to the styling of hair. In ancient Rome, women, men and children loved to style their hair. The hair styles Roman Hair Styles differed from individual to individual, often depending upon the social status in the ancient Roman society and age of the individual. 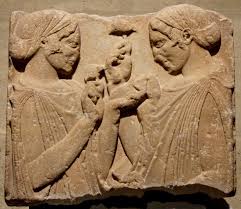 The ancient Roman woman particularly paid a great deal of attention to her hair. She beautified and decked herself, trying a plethora of hairstyles often coupled with the coloring of her hair.

A popular but conservative hairstyle was the tying of the hair back into a bun and clutching it with a pin. Other common hairdos among women were curls, waves, and curls, which were sometimes done alone or in tandem.

The ancient Roman women even dyed their hair, either blonde or red. These were the popular hair colors. A product known as the Batavian foam was used to produce blonde hair, and fat and ashes were used to produce red hair color. An interesting point to note is that wigs were made from the hair of Germans, captured in wars because of their natural blondness.

Body hair was regarded as undesirable by women. So, in order to dispense with body hair, they used a pumice stone. Facial hair was removed using pitch and resin.

The ancient Roman men generally had their hair cut or had their hair curled. Pattern baldness is a genetic problem in men. They lose their hair as they grow old. If there was severe hair loss, he would wear a wig to cover up and hide the problem. Also, grease and oil were thought to make hair grow and so they used these to condition the hair.

Beards were outmoded in the ancient Roman era. So men shaved or used the hair removal technique which the women used to ensure a clean-shaven look. In times of mourning, men were allowed to grow their hair and beard as a sign of grief. Men would go to barbers to get their beard shaved. Barbers were known as tensors.

The Roman children were allowed to keep long hair, often till the shoulder blade. Young girls basically tied their hair into a knot at the back or into a ponytail. Some girls straightened or curled their tresses according to their fancies.

The Roman boys were allowed to shave after attaining the age of majority. As a custom practice, the downy remnants of their first shaving of hair was preserved in a casket and later served to the ancient Roman Gods.