Ancient Roman Forts were solid. The walls and buildings were usually built of timber (like these at the Lunt). If the fort was going to be used for a very long time, the timber was often replaced with stone.

Some Roman forts were pre-fabricated. The continuous construction of forts and stockade led to the development of pre-fabricated materials and standard parts. 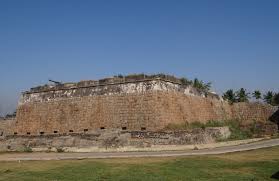 A fort would be set up with a large ditch around the outer edge. Dirt from the ditch was used to build a rampart. On the top of the rampart, a wooden wall would be built. If the Romans planned to make the fort permanent, a stone wall would be built to replace the wood.

The gates would have guard towers on both sides. The Romans also dug deep holes and put in sharpened wooden stakes. They also would put sharp branches and timbers in a shallow ditch to make it difficult for infantry to approach the walls.

Roman forts in Scotland, as elsewhere in the empire are to be found in a wide variety of sizes. Each was built and modified where necessary to accommodate an appropriately sized garrison, Roman Scotland we must remember was primarily a military affair.

There are traditionally three main types of Roman fortification; the Marching Camp, the Auxiliary Fort, and the Legionary fortress.

To these three basic types, there has been recently added a fourth classification, that of Vexillation Fortress.

Pons Aelius is the Roman Fort built along Hadrians Wall located at Newcastle UK. The Pons Aelius was a small fort by Roman standards and housed about 480 auxiliary troops. 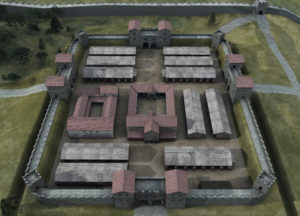 It included the Praetorium and Principia (Headquarters and Commander’s residence), barracks, granaries, latrine, and workshops.

The Roman bridge and fort at Newcastle formed the eastern end of Hadrian’s Wall but later the wall was extended three miles further to the east where a fort called Segedunum was built at what is now know as Wallsend. 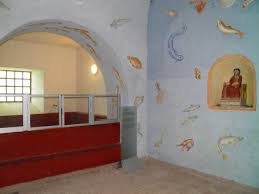 From around 122 AD, Segedunum Roman Fort held 600 soldiers and was one of the eastern forts along the wall. It would continue to perform this role for a period of around 300 years.

After this time, the fate of Segedunum Roman Fort is unknown, except that it was built over in the eighteenth and nineteenth centuries only to be uncovered from the 1970s onwards.