This article gives information about the Roman flag, its color and its meaning, insignia, emblem, and pictures of the Roman flag.

How did the ancient Roman flag look?

The ancient Rome had nothing termed as a flag. 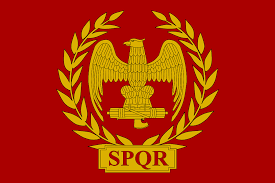 The Ancient Roman flag was nothing but the symbols that comprised the standards of battles including various sorts and forms of commands and rules. The ancient Roman buildings that had a political significance had facades that were inscribed with such symbols.

The so-called flag of the ancient Roman republic was red in color and had the letter SPQR on it. SPQR stands for ‘Senatus PopulusQue Romae’ which literally means ‘the Senate and People of Roma’.

This SPQR was the motive or objective of the ancient Roman republic and hence it was inscribed in the state monuments of Rome. The SPQR is found to be used in the Roman vexilla. The vexillum on the first page of the Asterix album had SPQR in it.

The legal or official documents of the Senate of Roma had a seal over them which included SPQR. As the US or USA represents the United States of America, or the acronym UN identifies the helmets and the vehicles of peace observers of the United Nations, SPQR represents the Roman Republic. The red color that has SPQR on it was a symbol of the Republic of Rome.

The military of the Rome followed the standards having the SPQR monogram which was also used in official legal inscriptions and legal documents. The ancient Roman ships used no flag either.

In spite of the relative resemblance between the containers of different cultures like Greek, Roman and Carthaginian, the distinction between them was made on the basis of a statue that was placed at the front of the container or right up on the mast.

The research says the Romans used to make widespread use of banners, symbols, acronyms, etc. and that too most of the times for military purposes. They used symbols to rally the armies.

The symbols or banners used by them had a peculiar and more or less spiritual significance to such an extent that when the troops were lost in the defeated military campaigns, enormous efforts would have been taken for retrieving them and most preferably by persuading them back.

The nominated political individuals termed as the ‘signifier’ in every century would hold the Military emblems. In such a manner, there used to be two individuals in each Manipulus and 60 in a legion. The history says that each centurion, before even joining the war, used to nominate a signifier to carry his standards forward in the next century.

The insignia or the emblems were not in a form of the Roman flag in the early centuries. The ancient Roman flag was never a kind of flag that we have now. The emblem was rather a bundle of straw tied right on the top of the post of the military.

Eventually, the insignia evolved into a wide range of symbols and shapes like hands (manus), eagles, cross, and many more of their kind that denoted the particular Manipulus to which the emblem belonged to.

The ancient Roman flag that evolved later included the cross that was during the recreation of the vexillum which was done by the Roman Legions conquering the ancient world.