Roman Emperor Nero was fair-haired, with weak blue eyes, a fat neck, a pot belly and a body which smelt and was covered with spots. He usually appeared in public in a sort of dressing gown without a belt, a scarf around his neck and no shoes.

When Nero was two, his mother was banished by Caligula to the Pontian Islands. His inheritance was then seized when his father died one year later. With Caligula killed and a milder emperor on the throne, Agrippina (who was emperor Claudius’ niece) was recalled from exile and her son was given a good education. 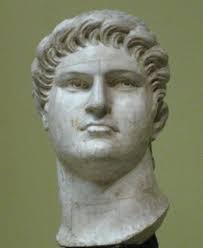 Once in AD 49 Agrippina married Claudius, the task of educating of the young Nero was handed to the eminent philosopher Lucius Annaeus Seneca. Further to this Nero was betrothed to Claudius’ daughter Octavia.

In A.D. 67 Nero traveled to Greece and performed on the cithara at the Olympian and Isthmian games. Nero also contended for the prize in singing and put to death a singer whose voice was louder than his own.

Stained with every conceivable crime he was haunted by the ghost of the mother he had murdered. Nero was finally dethroned by the Praetorian Guards. Nero then committed suicide on June 9, A.D. 68. He was the last of the Claudian family.

Claudius died in 54 and Nero was established as emperor. Nero became emperor at sixteen, the youngest Emperor yet. Ancient historians describe Nero’s early reign as being strongly influenced by his mother Agrippina, his tutor Lucius Annaeus Seneca, and the Praetorian Prefect Sextus Afranius Burrus, especially in the first year. 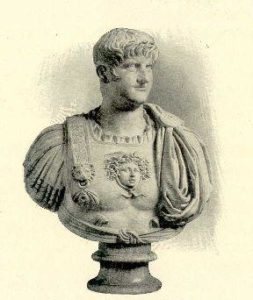 The first few years of Roman Emperor Nero rule were known as examples of fine administration. The matters of the Empire were handled effectively and the Senate enjoyed a period of renewed influence in state affairs.

Agrippina wished to rule through Nero, and her portrait briefly appeared on the coins alongside his. But the new emperor paid more heed to his advisors Burrus and the philosopher Seneca, and the result was five years of exemplary government.

Emperor Nero banned any magistrate or procurator from exhibiting public entertainment for fear that the venue was being used as a method to sway the populace. Additionally, there were many impeachments and removals of government officials along with arrests for extortion and corruption.