This article gives information about the history of ancient Roman cosmetics, their importance, and make-up.

Ancient Roman Cosmetics and Make up

The Roman Cosmetics products used today are very similar to those used by the ancient Romans. People during the ancient Roman period were extremely careful about their looks and beauty. Though cosmetics were applied by women, men also took care of themselves. Though some men did apply cosmetics, it was not an acceptable norm. However, men were allowed to use perfumes and remove their hair moderately.

The ancient Roman people drew inspiration of using make- up from the Greeks and Egyptians. During the early years of the Roman Empire, the concept of using cosmetics for enhancing one’s beauty was not well known.

However, as the Empire grew bigger owing to the acquisition of newer territories the economic condition of the Roman Empire improved. During the Roman Empire period, importance was given to white skin. It was a crucial aspect of the Roman beauty. To achieve white skin, women were known to apply beauty masks before wearing the make- up. 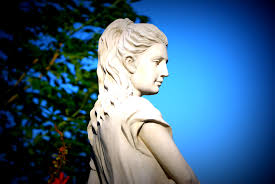 The commonly used women’s cosmetics in the ancient Rome were:

2) Chalk and white lead pigment were used to whiten the face,

3) Wine dregs to color the lips,

4) Kohl was the chief material used in the eye make- up. It included antimony and soot. Saffron was used as eyeshadow and it aided in improving the odor of the kohl. Soot from the fire along with animal fat was used as black eyeliner. Apart from saffron, green and blue eyeshadows were used. The green color was obtained from malachite and blue color was derived from azurite.

5) Cheeks and lips were colored by mixing together clay and animal fat,

6) Even sweat from sheep’s wool was used as a cosmetic product.

As far as the eyes were concerned, long eyelashes were associated with the chastity of the Roman women. The wealthy women were also known to bathe in donkey’s milk.

The use of cosmetics during this period was such that Rome had to import cosmetic products from countries like Germany, Gaul (today’s France) and China. However, these products were very costly and because of this reason, their use was restricted by 189 BC.

However, cheaper cosmetics were bought by women, especially the working women. During the ancient Roman period, the women used cosmetics in a room wherein men were forbidden to enter.

Application of make- up consumed a lot of time owing to the climatic conditions of Rome and the poor composition of the make- up. So, in case of the wealthy the make- up was applied by female slaves to their mistresses. But this extra help was beyond the reach of the common masses. The ingredients used as cosmetic were used by the Romans as medicines to cure illness.

Though using cosmetics was permitted in the ancient Roman period, it was believed by the society that those women who apply too much make- up were immoral or prostitutes, deceptive or manipulative or were involved with witchcraft.

The Roman people were known to apply various things ranging from swan’s fat to bean meal to soften the wrinkles that appeared on their face. Other problems like freckles and sores were cured by applying the ashes of snails.

As stated before, applying, make- up on the cheeks was one of the important aspects of being beautiful and it was commonly applied by the women in Rome. Women with pink cheeks were regarded to be attractive and have good health. Things like red ochre rose and poppy petals, red chalk, red lead, cinnabar and Tyrian vermillion were used to obtain the pink colored make- up for the cheeks.

The Roman women also colored their nails by applying red dye on them. Apart from the everyday use of cosmetics by women, they applied make- up even before they visited a temple. The use of Roman Cosmetics in some burial ceremonies is also known. Thus, cosmetics formed an integral part of the lives of the ancient Roman people.