It was twice destroyed by fire and on at least two occasions the stands collapsed, killing many people. There was a long barrier (Spina) that ran down the middle of the track, in the area of the picture where you now see only grass. 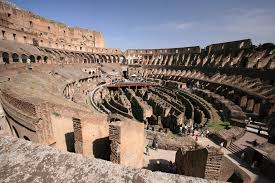 Its shape made it particularly suitable for chariot races, although spectators could also watch other stadium events there or from the surrounding hillsides. Each year in ancient Rome, from the early legendary period, the Circus Maximus became the venue for an important and popular celebration.

Later circuses in Rome were often confused with Greek stadia, which were later adapted to the Roman world by their own right, but were only approximately one-half the size of the typical circus (180-200 meters in length, 30 meters wide, with only two turning posts and no spine). 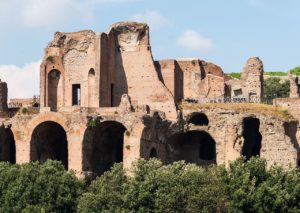 The Roman circus itself consisted of tiers of seats build around a U-shaped arena with an elaborately ornamented barrier, the Spina, running down the middle. Metal, or turning posts, adorned each end of the course.

At the open end of the U waited up to twelve four-horse chariots (quadrigae), which began the race from starting gates (Carceres), drove to the right of the Spina, and then continued counter-clockwise for seven laps.

Because there were wild beasts in the circus arena, spectators were offered some protection through an iron railing. When Pompey held an elephant fight in the arena, the railing broke. Caesar added a moat (euripus) 10 feet wide and 10 feet deep between an arena and the seats.

Nero filled it back in. Fires in the wooden seats were another danger. The charioteers and those behind them were in particular danger when they rounded the meter.

The Circus Maximus in Rome also had the ancient equivalent of the skyboxes you see now in stadiums for professional sports. The Emperor had a reserved seat, as did senators, knights, those who financially backed the race, those who presided over the competition, and the jury that awarded the prize to the winners. The last race held at the Circus Maximus was in 549 A.D., nearly a full millennium after the track’s construction.