Pottery was essential for cooking food in antiquity or essential Roman Ceramics Cooking Pots. Although metal utensils made of bronze or iron were widely available in the Roman period, simple, functional earthenware bowls, pans, casseroles and jars were an inexpensive and standard part of the equipment of every kitchen. 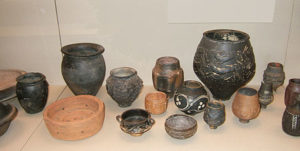 However, one vessel type used in food preparation was closely linked with the spread of Roman culture and Roman cuisine was the ‘mortarium.’ This was a robust shallow bowl with a thick, out-curved rim that made it easy to handle, often a pouring lip, and an internal surface deliberately roughened with a coating of grit or coarse sand during manufacture.

It was used with a pestle to pulverize ingredients in order to prepare elaborate and carefully seasoned Roman dishes; the Roman culinary tradition made extensive use of herbs and spices. The mortarium was the Roman equivalent of the food processor, and is a real indicator of ‘romanization.’

Like so many other specialized Roman ceramic products, many mortaria also bore workshop or makers’ stamps on their rims and noting their chronology and distribution can help archaeologists understand trading patterns and the Roman economy. Mortaria is known as Roman Ceramics Cooking Pots

Amphorae, or amphoras, were used during Roman times to transport food on long and short distances. The content was generally liquid, olive oil or wine in most cases, but also garum, the popular fish sauce, and fruit sauce. 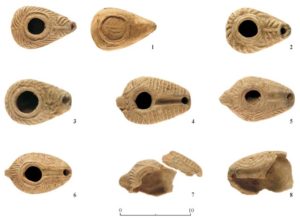 As a container, an amphora was supposed to be strong, not too heavy, shaped in a way suitable for easy storage in the ship, and, at the same time, convenient for handling once arrived in its final destination.

Usually, amphorae are two-handled terracotta containers with a globular/cylindrical body, a rim of various shapes, and a spiked or, less commonly, flat base. The spike was suited for a stable storage arrangement in the ship and it worked as a third handle in the process of emptying the container.

Artificial lighting was a common idea in the ancient Roman world. Candles, made from beeswax or tallow, were undoubtedly the cheapest means of lighting, but candles seldom survived archaeologically. Lamps fueled with olive oil and other vegetable oils survive in great numbers, however, and have been studied in minute detail. oil Lamp 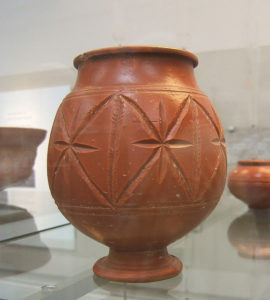 Some Roman lamps were made of metal, and could be of highly elaborate forms incorporating statuettes and multiple nozzles, but fired clay was the most usual material, and the majority of small, probably inexpensive, clay lamps had a single nozzle for one wick, and therefore one flame.

Most of these clay lamps were shaped using molds in workshops that turned out large numbers of standardized products. Some of the most popular forms incorporated a central discus, a circular area usually around 4-6 cm. in diameter, that incorporated the filling-hole and could be ornamented with pictorial motifs in low relief.