Ancient Roman Ballista: The ancient Roman Empire spanned across much of the old world. The rise and the long reign of this empire were doubtless due to its military prowess. The Romans had inherited many war engines which were developed under the Greeks.

The Greeks had started developing mechanical artillery for the warfare. Artillery can be defined as any weapon which is capable of throwing a projectile over some distance. The most famous artillery developed by the ancient Romans is the ballista. 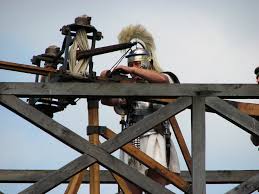 Ballista is a missile weapon, used to throw objects over a long distance. The original design was invented by the Greeks. The Romans adapted it successfully and various models were developed.

They were one of the most feared weapons of siege available to the Roman Empire. Before this, a walled fortress was almost impossible to breach till the residents ran out of food and water. However few fortresses could resist for long the onslaught of a ballista.

The earliest record of the use of ballista in ancient Rome was in the campaigns of Julius Caesar. Later it became a compulsory feature of the Roman army. The ballista uses the same principal as a giant crossbow. It was made of wood and iron plates. The force of the missile came from torsion. This was created by tying and twisting two lengths of rope together. This was done tightly. 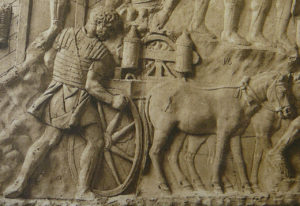 The ropes were mostly made from animal sinews though animal and human hair were also used. The force was transferred to two wooden arms. A winch and claw system was used to draw back the ropes like the bowstrings.

On the top was a slider on which the projectile was placed. When the strings were released the force caused the projectile to travel a great distance with considerable force.

This basic design of the ballista was being constantly modified and improved. They were sometimes mounted on wheels to obtain better accuracy. The earliest ballista was huge and unwieldy.

The design was modified. The later versions were carried by the infantry. These faster and smaller versions were called Scorpio. Several types of ballista evolved. Some could fire multiple ammunitions at the same time.

For the projectile, the Romans used a variety of objects. Rocks and stones were the most common. Darts with heads of iron sometimes dipped in poison were also fired from the ballista. Body parts and rotting animal carcasses were other forms of ammunition used in the ballista.

The ballista was highly accurate over a long distance. It has been recorded that they had a maximum range of about 460 meters.