Theatres were a common feature of Ancient Roman entertainment. They were a legacy of the Greek civilization and bore many similarities to their Greek counterparts. However, there was a distinct point of difference. Greek Roman Actors enjoyed a high status in society. However, the view of the Roman actors was less than respectful.

In ancient Rome, both tragedies and comedies were enacted. The roles of both the men and the women were played by men. In earlier times it was not acceptable for women to act in theatres. However, during the latter part of the empire, women also entered the profession.

No respectable Roman citizen became actors. Most actors were slaves. Foreigners were also actors. Slaves who had managed to become free sometimes formed a band of actors. Their lifestyle was rather questionable and blatant. 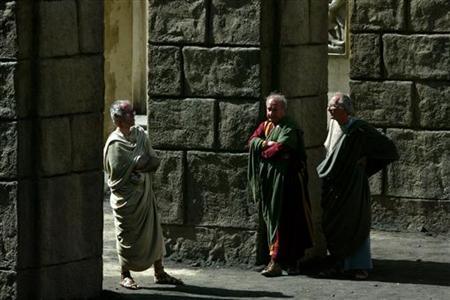 As a result, they had acquired a bad reputation. This was so true that Emperor Julian the Apostate forbade the pagan Roman high priests to mingle with the actors or even watch performances. Emperor Tiberius was known for his liberal attitude, but even he forbade the upper class of Rome to socialize with actors.

Tragedies and comedies were both enacted in Ancient Rome. Typically, the story had a king, a soldier, a young man and a young woman, the man’s father and the slave. The plots were not very original and the theme was repeated often. A single actor sometimes played multiple roles. The most well-known actors of the time were Roscius, in comedy, and Aesopus, in tragedy.

The costumes and wigs of the actors were the main indications of the character that the actor was playing. Old men wore white costumes while young men wore colorful dresses so that they could be easily identified by the audience. The wigs denoted the character’s station in life. Gray wigs indicated old men; red wigs were for slaves while black wigs denoted young men.

Masks were used to emphasize the characters. They incorporated cheek support which sometimes also acted as amplifiers. The scenes enacted were often lewd and seldom showed taste or depth. The classics did not feature prominently in the ancient Roman Theater.

The tone of the play was such that women were not allowed to watch the performances. However, pantomimes were much popular. The story was brought out with the accompaniment of music and dancing.

The actors in ancient Rome used the theater to protest and criticize the empire. They often went to extremes which did nothing to increase their respectability or acceptability in the Roman society. Even after the Church became well established, actors continued to express their disapproval. The content made the church frown upon them and ultimately, the theater fell into public disfavor.