The first Roman Stadiums originated in the VIII Century BC around a rudimentary athletics track shaped as an elongated “U”. Starting and finish line was at the two ends and there was one only 192 m long and 32 m wide track. A stone stand with two separate entrances for judges and for spectators, who could, therefore, watch the athletes’ efforts and cheer them throughout the competition, was built along the track.

The elongated-U-shaped stand ran along the three sides of the track, two rectilinear and one bent, on the other side opening onto the surrounding landscape. Olympia Roman Stadiums, which was extended as the Games became popular in the whole ancient Greece, could welcome up to 45,000 spectators. 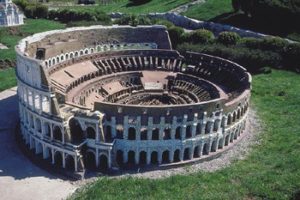 The Roman Stadium of Athens Greece is known as the Roman Stadium, the Panathenaic Stadium or just Kallimarmaro (which means “made of fine marble”). This amazing stadium was originally constructed in the ancient times to host the famous Panathenaic Games, which were held to honor goddess Athena, the protector of the city.

At first, the stadium had wooden seats, but in 329 BC the governor Lycourgos remade it with marble. In 140 BC, the Roman general Herodes Atticus renovated it and obtained a capacity of 50,000 seated people.

When was the Colosseum built

The present-day name “Colosseum“, or rather “Colosseo”, is said to have come from the colossal 35m (115 feet) high bronze statue of Nero, The Colossus, that stood between the stadium and the Roman Forum. 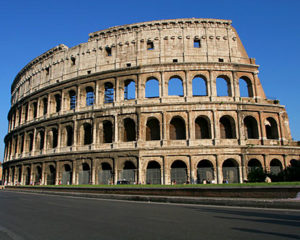 The stadium was referred to as “the Amphitheater by the Colossus”, and it is thought that this was corrupted to Colosseum. This is certainly probable after the bronze statue fell (probably in the 4th Century, used for its bronze content) and was largely forgotten.

The stadium is built in the form of a circus (265 meters by 106): its long sides are parallel, while one of its short sides is curved and the other is slightly oblique.

Certain important works of art found in the area have been identified as having adorned the stadium, for example, the statue is known famously as Pasquino, which is a group featuring Patroclus and Menelaus, and also other statues found in the streets surrounding the four sides of the building during other excavations carried out at various moments.

The Roman stadium where Emperor Antoninus Pius staged Rome’s version of the Olympic Games was opened recently for the first time in almost 500 years.

In 1931, a road was built through the middle of the ancient stadium, which complicated the excavation project, the Italian news service reported. 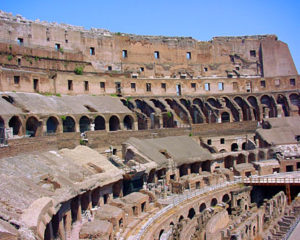 Circuses were usually built around the walls and adjacent to the imperial palace, in order to ensure direct access for the emperor and his court. Due to their positions, these large open spaces were sometimes used for some more public activities as well, thus turning into an integral part of the city life.

Seating was strictly according to social class, the closer to the central arena, the higher your rank in society. The emperor and Vestal Virgins occupied boxes at the central narrowest points of the stadium, while the senators would sit at the same level at the ends of the stadium. Next up were the Nobel men and knights, then the wealthy citizens and then the poorer plebeians (citizens)