Roman Domes are curved structures. They have no angles and no corners and they enclose an enormous amount of space without the help of a single column. It was the Romans who first fully realized the architectural potentialities of the dome. 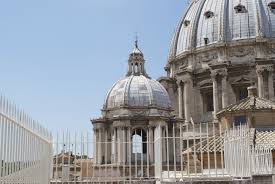 The Roman use of the arch together with their improvements in the use of concrete and construction of vaulted ceilings also enabled huge (covered) public spaces such as the public baths and basilicas. The Romans also based much of their architecture on the dome, such as Hadrian’s Pantheon in the city of Rome, and the Baths of Diocletian.

The Ancient Romans made use of vaults especially for covering the halls of their baths. The Roman use of the arch together with their improvements in the use of concrete and construction of vaulted ceilings also enabled huge (covered) public spaces such as the public baths and basilicas. 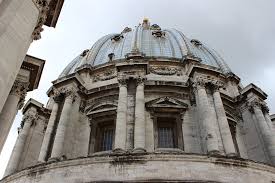 The dome with its central oculus and original bronze rosettes in the coffers was understood as the vault of heaven. The vault of the Caldarium of Caracalla’s Baths was supported by four gigantic pillars.

The most celebrated Roman dome was, however, the Pantheon, the design of which was echoed in many early Renaissance buildings, in particular by Antonio Palladio. The earliest masonry dome, the Pantheon, was so heavy that engineers carved intricate shapes, called coffers, along the walls to reduce the weight of the enormous structure.

The first dome built in Rome after many centuries (San Teodoro) was designed in 1453 by Bernardo Rossellino. The earliest domes were probably roofed primitive huts and consisted of bent-over branches plastered with mud. 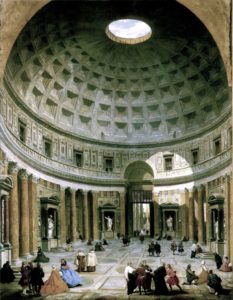 Why are domes important

Another primitive form, called a beehive dome, is constructed of concentric rings of corbelled stones and has a conical shape. Ancient examples have been found in the tombs of Mycenae and can also still be seen in the folk architecture of Sicily.

In the quest for height, engineers came up with a few tricks. By the early 1400s, Roman engineers began building two domes in one to create the illusion of even greater height.

The U.S. Capitol dome, built in 1793, gets its height from this engineering sleight of hand. The large outer dome is a thin shell, held up by a ring of curved iron ribs. Underneath it, all is a smaller, self-supporting dome, visible only from the inside.

Santa Maria Della Pace was initiated under Sixtus IV, but the dome was built in the 16th century between 1520 and 1525 and it shows the three main elements of a dome: the drum, the vault, and the lantern.