The Romans built a fort, called Londinium, on the site of present-day London on the North Bank of the River Thames in 43AD. Londinium was not the capital of England. At the time the biggest of the ancient Roman cities in England was at Colchester or, given its Roman name, Camulodunium.

Facts and Information about Londinium 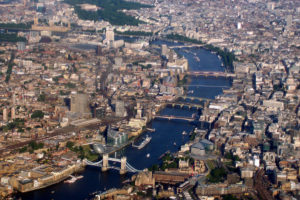 The second building of Londinium increased the size to 62 acres. The city gradually increased in size and became one of the biggest Roman cities covering over 300 acres containing a population of over 15,000 people.

Description of the City of Londinium

The city of Londinium boasted of a large courthouse (basilica) and marketplace (forum) which was located on the site of present-day Cornhill. The following facts and information provide a description of the city.

Fact 1: A procurator’s palace was built in Londinium (Cripplegate). A Procurator was a high ranking Roman officer responsible for the finances of an imperial province, including tax collection and the payment of troops

Fact 2: Londinium was an important port and trading post from which goods were imported from all over the Roman world

Fact 3: The town hall, government offices, and courtrooms were in the basilica at Cornhill

Fact 4: The marketplace (forum) was situated next to the basilica

Fact 7: The Amphitheatre was located at the site of the Guildhall Art Gallery. It was a massive structure which could hold up to 8000 spectators

Fact 8: Many of the original wooden Roman structures of Londinium were re-built in stone and marble

Fact 9: There was even a Fire Brigade who were stationed around the walls and gates

Fact 10: Latin was the language inflicted on the native people of the city

Destruction of the City of Londinium by Boadicea

The army of Queen Boadicea army burned Londinium to the ground and massacred the 25,000 inhabitants who had not fled. The Romans gained control of the Iceni rebels and a new Roman city at Londinium was quickly erected following the defeat of Boadicea. The Romans had learned the lesson taught to them by Queen Boadicea and looked to defend the town of Londinium. 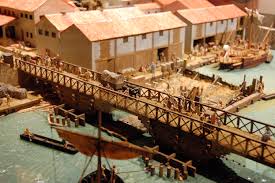 By the 200BC all except the river side of Londinium was totally enclosed by a massive defensive wall. A section of the Roman Wall has been preserved in the Tower of London. The town of Londinium had several gates and exits from the enclosure wall. The Roman Roads led to the Londinium gates which had a 100-foot wide gatehouse and was flanked by square towers.