The food that was served in the ancient Roman banquets has changed a lot. In the beginning, there was not too much of disparity between the people of the lower and the upper society but as the Roman Empire started growing, this disparity also started growing.

Let us understand the Roman banquet in the following terms

In Roman Banquets, The morning breakfast was known as tentaculum, this was generally served at the time of dawn. The roman usually ate small lunches. It was the evening time when they consumed Cena. Cena was the main meal of the day for them.

In the people belonging to the lower strata of the society, the very old routine of meals used to be followed. Very flat and ground forms of loaves were made of a cereal grain.

This was known as bread. Sometimes the break was dipped in wine and it was occasionally also eaten with grapes, olives, and cheese.

The table culture was such that there were quite strict cultures that were followed by the people of the upper strata. As there was a growth in the income of the people, in the same proportion even the standards and sophistication of the people started increasing. 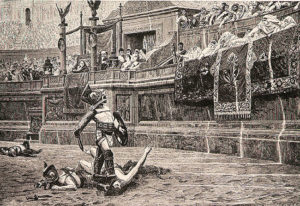 But it is quite surprising that the nutrition value of the food that was not given too much of importance.

The dinner was eaten at the special dining table. Feet and hands were compulsorily washed before the starting of any meal and more specifically before starting Cena. The food was taken with the help of two spoons. At the dining or the eating table, the large pieces of food were broken into smaller pieces and then they were served as food in the plates.

It was the summertime when people preferred eating by sitting outside. There was comfortable arrangement outside the homes and this was used for eating and relaxing in the natural environment.

A lot of entertainment accompanied the meals. There were musicians, artists, singers, etc who used to make the food eating even a better experience. Dancers were some people who were not there at the time of meals because it was thought that this was quite improper.

The wine was something that was consumed quite commonly during the meal time.

The desserts were made up of the fruits. There was a clear difference between the grapes that were directly and the ones that were consumed directly.