On basis of the Roman Army Ranks, the following were the hierarchies in the Roman army. They are as follows:

1.The General or Dux or Imperator or Commander
2.The Lieutenants or Legates (legal)- a person who frequently commanded very separate regions
3.The Quaestor- a person who was charged with the care of the military chest and also of the supplies of different things.
4.The Body-guards of only the senior officers
5.The military tribunes
6.The Captains
7.Immunes – Soldiers who possessed special kind of skills. They were valued.
8.Standard bearers
9.Evocati – Veteran soldiers
10.Beneficiary
11.Concern – The person who was the musicians
12.Munifex – the soldiers who were among the lowest ranks, almost equivalent to the privates
The number of soldiers who will be in a legion was something that was not fixed. In the beginning, the number of soldiers in a legion used to be 30000.

As the population grew and also the opponents’ strength grew, the need for the number of soldiers per legion also grew. The number was increased to 4000 after some time.

It was during the Punic wars that the strength was further increased to 4200. The rise kept on happening gradually and eventually. They increased to 5000 and then later to 6200. 6200 thus became something like the upper limit. 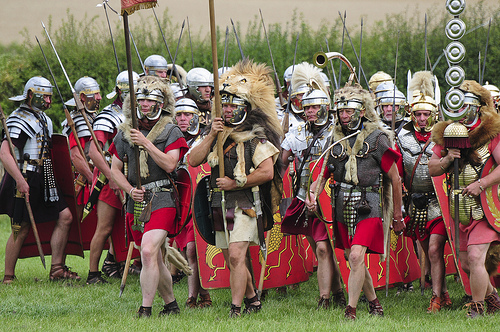 Some of the Roman army ranks are as follows:

Adscripticius- it meant an additional soldier of the Roman Republic. E was used to fill up the position of someone who was killed or injured and thus unable to participate in the war.

Armicustos- he was a person who was given the charge of administrating and taking care of the supply of all types of weapons.

Beneficiary- he performed the services that were performed by the people of the high and superior rank.

Concern (Cornices)- a person who was the horn-blower in the Roman Army ranks. There was one such person in every century.

Evocati- these were soldiers who had already worked on the full-time basis.

Extraordinary- these were the soldiers that were kept for the backup. They were the ones that were easily available.

Hastiliarius- he was the weapon instructor.